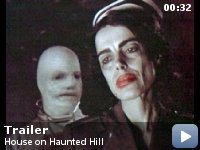 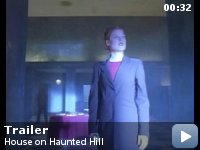 A millionaire offers a group of diverse people $1,000,000 to spend the night in a haunted house with a horrifying past.

Storyline
When an eccentric millionaire offer a group of opposites $1,000,000 to spend the night in a so called "Haunted House" with a murderous past, they figure it is a quick way to get quick money and leave. All of them are sure it is some made up story just to mess with their heads a little and test their courage. But, once they stay in the house they start to think about the mistake they made in coming there when mysterious things start to happen.

William Malone got the idea to set the movie in a former insane asylum when he was filming an episode of
Tales from the Crypt in a former asylum and noticed that crew members were running scared out of the basement, not wanting to film there.

Boom mic visible:
When Taye Diggs and Ali Larter walk into the Zoetrope room, the mic is visible at the top right of the screen, peeking out from behind the zoetrope tank. Diggs' flashlight shines right on it at one point.

Watson Pritchett:
Sorry to interrupt. God dammit, you give me my god damn check right now! 'Cuz I want it! So you give it! Now! I'm serious.

Despite a weak ending this is a surprisingly creepy Hollywood horror

This remake of the old 1958 movie sees the plot expanded and made a lot more
creepy and enjoyable. In fact the end point of the original is only the
halfway mark of this one. The plot may not be imaginative but the delivery
is very good for this type of film. I'm not a big fan of horror or this
type of Hollywood slasher movie as I find them too obvious and not scary.
However here the gore is well used and the general creepy mood wins the
film. The movement of the deceased Dr Vannacutt is very creepy and is much
better than some of the gore.

Sadly the final 20 minutes feels it needs to reveal a bigger evil and the
secrets of the house are brought to life in boom of CGI beasties. At this
point it reverts to form and because just another Hollywood creature feature
and it is a bit of a let down. However up to this point it works very well
and it's real creepy.

The cast are all pretty good and do `camp' when necessary but don't take
away from the terror that's coming later. Rush plays nicely to the camp in
his homage to Price's role in the original. Jensen, Diggs, Gallagher and
Kattan all do well and the cast do better than the scream queens that usual
inhabit these films.

Overall the film starts like any other Hollywood horror but the clever
direction, creepy music and imaginative visuals of Dr Vannacutt all create a
creepy feel to the film that is better than the gore that also comes. The
final section slides back into standard fare with the old CGI evil coming to
get us – but up till then it's surprisingly good stuff.