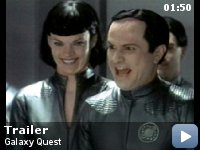 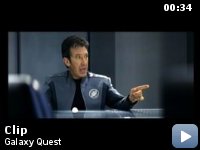 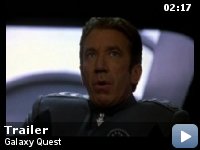 The alumni cast of a cult space TV show have to play their roles as the real thing when an alien race needs their help.

Storyline
The sci-fi television series Galaxy Quest, which took place aboard the intergalactic spaceship NSEA Protector, starred Jason Nesmith as suave Commander Peter Quincy Taggert, Gwen DeMarco as sexy communications person Lt. Tawny Madison (a role which consisted solely of repeating what the computer stated, much to Gwen's annoyance), Shakespearean trained Sir Alexander Dane as alien Dr. Lazarus, Fred Kwan as engineer Tech Sgt. Chen, and Tommy Webber as child gunner Laredo. Seventeen years after the show last aired, it lives on in the hearts of its rabid fans. However it lives on in infamy for its stars, who have not been able to find meaningful acting work since. Their current lives revolve around cashing in on however those roles will afford, which usually entails attending fan conventions or worse, such as shopping mall openings. Only Jason seems to relish his lot in life, until he finds out that his co-stars detest him because of his superior attitude as "the Commander"…

Taglines:
The show has been cancelled… But the adventure is just beginning.

In theaters, the film was presented at 1.85:1 for the first 20 minutes. When Tim Allen first realizes he's on a real spaceship and the vista of Thermia is revealed, the screen image widened to 2.35:1 as the parting walls of the spaceship revealed the vista.

Continuity:
Sarris and Jason have their ships going head to head. Jason calls for Mark 4 speed and the exterior shot of the ship shows nothing behind it. When Jason reveals to Sarris that he's "dragging mines" the exterior shot now shows mines right on the ship's tail.

Laredo:
We made it, Commander. We made it.

Dr. Lazarus:
By Grabthar's hammer, we live to tell the tale.

Commander Peter Quincy Taggart:
I don't like it. It was too easy.

Laredo:
Wait. Oh, no! They're everywhere. There are time knots opening everywhere.

I still don't quite understand why "GQ" never conquered the box office.
The movie is clever, hysterically funny, surprisingly moving and, as
one reviewer pointed out, more respectful of (and better at
communicating) the ideals of "Star Trek" than any of the recent "Trek"
movies or television incarnations. The script is inventive, the special
effects are vivid and powerful (especially when the actors see the real
ship for the first time, and when the rock monster rampages through the
ship), and the characters are incredibly well drawn.


I'm also puzzled by the negative reactions some people have to the
film. Does the film fail to register because the "Trek" social
phenomenon is unfamiliar to them, thus there's no frame of reference?
I'd really like to know.

Comedy is possibly the hardest genre to get right, because line
delivery, timing, direction and character shading all have to be pretty
much perfect or the movie just won't be funny. GQ nails these elements
— right on the head and in virtually every scene — and keeps up the
pace by constantly moving its characters forward. Tony Shalhoub (Fred),
Sam Rockwell (Guy Fleegman) and Enrico Colantoni (Mathesar) in
particular are so dead-on perfect in their scenes that lack of box
office and the Academy's traditional indifference to comedy are
probably the only reasons these guys didn't get Oscar nods. (Okay,
well, 1999 was also an incredibly strong year for American cinema.)

But GQ is also strangely moving — particularly in the way it derives
comedy from despair. The actor characters' lives are in ruins, not
unlike the aliens they eventually save from extinction. Perhaps this is
why — even though the characters don't know it yet — the two groups
get along so well and why the actors make the decision to actually
become their TV characters in the end. This may also be why the dismay
in Mathesar's face when he learns the truth is so painful.

I suspect GQ also got lumped in with the likes of "Scary Movie" and
"The Naked Gun" movies in the public's collective conscious: It was
perceived as just another spoof and therefore not worthy of significant
attention. I hope the movie develops enough of a cult following that it
one day reaches that wider audience it deserves.