For Love of the Game 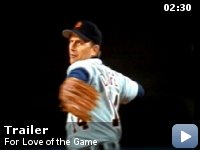 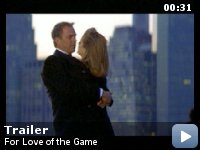 A washed up pitcher flashes through his career.

Storyline
A baseball legend almost finished with his distinguished career at the age of forty has one last chance to prove who he is, what he is capable of, and win the heart of the woman he has loved for the past four years.

Taglines:
Billy Chapel must choose between the woman he loves and the game he lives for.

On the DVD, under the "on the mound" section, you can answer a series of questions about the perfect game. If you answer all of these correctly, you will get an Easter Egg: the short black and white film "Play Ball with Babe Ruth" will play.

Jane Aubrey:
[describing Billy]
You're perfect. You, and the ball, and the diamond, you're this perfectly beautiful thing. You can win or lose the game, all by yourself. You don't need me.

For Love Of The Game

Maybe I'm looking at this film through rose colored glasses. Sam Raimi is
one of my favorite directors, a real talent with visual ingenuity and a
penchant for silliness. With last holiday's bleak A SIMPLE PLAN, Raimi gave
up his EVIL DEAD past and churned out the most satisfying dramatic thriller
of last year. He is certainly growing by leaps and bounds as a storyteller,
and his latest film, FOR LOVE OF THE GAME, is another surprise for those of
us who are fans. A truly elegant, dashingly romantic, white-knuckled look at
baseball and matters of the human heart, GAME represents what a true
Hollywood soap opera should be, effective.


Kevin Costner plays Billy Chapel, an aging pitcher for the Detroit Tigers
heading for the mound for may be his last time ever. The team owner has sold
the organization to a corporation and they have plans to trade Billy. His
arm continues to fail him more every time he steps up to thrown. And to top
it all off, Billy must deal with his tempestuous relationship with Jane, a
woman he met by a broken down car on the side of the road five years ago and
has yet to fully commit to. With all these thoughts swirling inside Billy's
head, he unknowingly begins pitching a perfect game. Unable to keep his mind
clear, Billy thinks back on his life during the game and considers the
mistakes he has made and the people he has met.

Told mostly in flashback, LOVE OF THE GAME is first and foremost a baseball
movie. While being knocked for his recent professional choices (yeah, I
liked THE POSTMAN, say what you will) Kevin Costner seems to have been
crowned king of the baseball flicks. Ron Shelton's BULL DURHAM is pure
genius, the best baseball film ever. FIELD OF DREAMS is more like GAME, both
share a strong heartbeat and retaining a smart enthusiasm for the sport.
Costner has been the glue that held both films together. He's always been a
good actor, only reaching brilliance once (DURHAM). He has the rare charm
the many actors forget to consider. While not technically proficient,
Costner knows screen charisma well. GAME gives us a desperate Costner
performance, one which lets the actor take his guard down for once. His
Billy Chapel is a man used to success, yet unsure how to use it to his
advantage. A man who can hardly imagine himself consumed by anything but
baseball. It's a great performance from Costner. My only hope is that public
opinion doesn't tarnish the acting for the paying crowd.

Kelly Preston has the more troublesome task of shining brighter than
Costner. A working actress for sometime now, this new film feels like the
first time Preston is really acting. I enjoyed her supporting work in 1998's
underrated JACK FROST, and GAME finally puts her front and center. She
bounces effortlessly of Costner, and the two – while skittish at first –
melt into a nice chemistry that packs more emotion than I expected. The
loopy John C. Reilly (BOOGIE NIGHTS) and Jena Malone (STEPMOM) are also
quite pleasant in small roles.

Working with even more restraint than his SIMPLE PLAN, Raimi brings to the
table his gift for camera placement and visual tenacity. The baseball scenes
in GAME are very romantic, the title doesn't lie. A self-professed fanatic
of baseball, Raimi's love of the game shows in each shot. With noted
cinematographer John Bailey, the two create a pristine looking film. The
stadium scenes are both frightening cinematic and realistic at the same
time. The look of the film might not register with many people, but I
couldn't help but to admire such attention to detail.

Screenwriter Dana Stevens made quite an impression with her spare and warm
CITY OF ANGELS remake. What she brings to GAME is the feeling of courtship
that I enjoyed in Costner's last film MESSAGE IN A BOTTLE. Costner and
Preston really show the genesis of a relationship, warts and all. The
structure of flashback that Stevens uses to tell the story isn't as
unfortunate as it sounds. It's all a rather nice mix of familiar baseball
melodrama and a hearty dose of Hollywood soap opera. Stevens proves once
again that she has a wonderful ear for romantic entanglements.

Call me a sucker for the obvious, but FOR LOVE OF THE GAME really worked for
me. I really was moved by the story and enjoyed all the nuances and quirks.
This classy film might not have a hero with a chainsaw for a hand, a crispy
scientist with a reliance on synthetic skin, or a quickdrawing Sharon Stone.
What it does have is strong emotional resonance. A audience film that the
mainstream will love and the arthouse will abhor. I'll take that any
day.——– 10/10