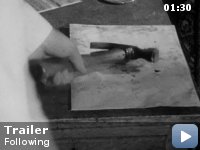 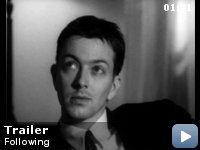 A young writer who follows strangers for material meets a thief who takes him under his wing.

Storyline
An older man listens to Bill's story about being a callow writer who likes to follow strangers around around London, observing them. One day, a glib and self-confident man whom Bill has been following confronts him. He's Cobb, a burglar who takes Bill under his wing and shows him how to break and enter. They burgle a woman's flat; Bill gets intrigued with her (photographs are everywhere in her flat). He follows her and chats her up at a bar owned by her ex-boyfriend, a nasty piece of work who killed someone in her living room with a hammer. Soon Bill is volunteering to do her a favor, which involves a break-in. What does the older man know that Bill doesn't?

One of the things Bill has stolen is the soundtrack to the movie
Trainspotting.

Continuity:
At the site of the safe robbery, when The Young Man drops his pants to tape the money to his legs, he's wearing striped underwear (which are also seen hanging on a clothesline during the confrontation between The Young Man and Cobb later in the film), but when he returns to his apartment and removes the money, he's wearing underwear with polka dots.

Bill:
When I started to follow people, specific people, when I selected a person to follow, that's when the trouble started.

Christopher Nolan's first feature film wowed critics who saw it when it
first came out. Shot on a micro budget of $6,000 this is a student film with
real class. The film is shot in black and white, and features people who you
assume are friends of Nolan's appearing in the movie. This is not to say
they are bad actors because they are quite good. You could see Jeremy
Theobald and Alex Haw appearing in other projects but unfortunately they
haven't since this was made 6 years ago.


Nolan's thriller, much like Memento, does not play chronologically, it
shifts the scenes around much like Pulp Fiction. The writing is fantastic.
It is a great twisting thriller but because the temporal order of the film
is shifted around it makes it even more interesting. I thought the last ten
minutes in particular when everything starts to become clear were excellent.

For a film of such a small budget and with no recognizable names at all,
this is so good. It is superior to most that Hollywood studios offer and
Nolan after three films (this, the superior Memento and the not quite as
good but still excellent Insomnia) has cemented himself as the most exciting
new talent of recent times. I can't wait for Batman.

This film is short and sweet and certainly a great watch. It is very
professional and the twists are fantastic and completely surprising. I also
thought that the score from David Julyan was also excellent, very
atmospheric and had a chilly quality to it. He has gone on to compose
Nolan's other films.

Overall I would recommend this, I intend to get all of Nolan's films. This
is a low budget gem. *****