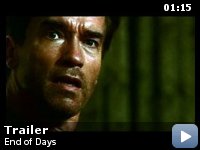 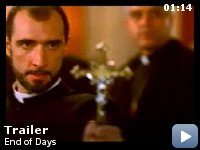 At the end of the century, Satan visits New York in search of a bride. It's up to an ex-cop who now runs an elite security outfit to stop him.

Storyline
On December 28th, 1999, the citizens of New York City are getting ready for the turn of the millennium. However, the Devil decides to crash the party by coming to the city, inhabiting a man's body, and searching for his chosen bride, a 20-year-old woman named Christine York. [If he bears her child between 11:00 PM and midnight on New Year's Eve], the world will end, and the only hope lies within an atheist ex-cop named Jericho Cane, who no longer believes in God because of the murder of his wife and daughter.

Taglines:
The end is near

Was the last movie to be pressed in the laserdisc format in the United States.

Father Kovak:
Do you believe in God?

Jericho Cane:
Maybe once, not anymore.

Jericho Cane:
We had a difference of opinion. I thought my wife and daughter should live. He felt otherwise.

Darker than your average action film


Hyped to the heavens when it first came out as Schwarzenegger's
comeback movie, this 1999 film steers the Governor away from his
attempts at comedy and collaborations with Danny Devito and back into
the sort of action packed carnage that made his name in the first
place. However, where the likes of Commando had him portraying
invincible supermen with a neat array of guns and one liners to hand,
End of Days is considerably darker.


Set in New York on the eve of Millennium, the film shows a version of
the Austrian Oak previously never witnessed. He plays Jericho Cane, an
alcoholic ex-Cop in charge of a security squad who finds himself
embroiled in a battle to save a young girl (Robin Tunney) from being
raped by the devil (a sadly, rather ineffective Gabriel Byrne) and
bringing about Armageddon. As you do.

Cane himself is not the best sort of man for saving all creation
either. He is mired in deep depression, has abandoned any faith in God
he may have once had and when we first see him, is contemplating
suicide. However, saving the girl gives him a drive and determination
even when faced with some conflicting views from the Catholic Church
about how best to go about this. All of this takes place in a very grim
and gritty vision of New York where the rain never stops falling, urban
decay is rife and pillars of steam rise from manhole covers. It is a
fitting location for the end of all creation to begin and cast a dark
veil over the flick.

Of course, that isn't to say the film is all doom and gloom as there
are a few glimpses of just how seriously the makers weren't taking
their project (the argument between Arnold and Kevin Pollack in the
former's apartment is hilarious). Plus, while the story and characters
are all developed to match the atmosphere of impending dread during the
first hour and a half, the last twenty minutes are made up of the kind
of explosive action that strangely doesn't jar against the grimmer
nature of the rest of the film, though the CGI devil at the climax is
pushing it a little.

All in all, an enjoyable romp for fans of the Governator before his
attention was diverted by a political career. It compares well to his
classic eighties work by trying to do something different and while it
may not gel properly in places, for a good 80% of the running time it
does a very entertaining job.