Blast from the Past 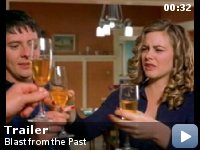 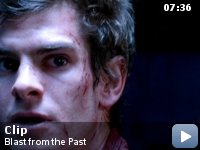 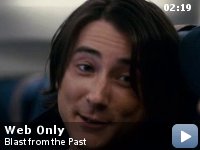 A romantic comedy about a naive man who comes out into the world after being in a nuclear fallout shelter for 35 years.

Storyline
Adam Weber is the child of an eccentric inventor and his wife. Following a bomb scare in the 1960s that locked the Webers in their bomb shelter for 35 years, Adam Weber must venture out into Los Angeles and obtain food and supplies for his family. He meets Eve, who reluctantly agrees to help him out.

When Mr Webber first goes back up after 35 years he meets a transvestite prostitute who says to him "Like the song says, a country boy can survive". The song he was referring to was "A Country Boy Can Survive" by Hank Williams Jr..

Continuity:
When Adam (3.5 years old) was sitting on his father's lap and reading from a book during Christmas, his feet changed from being folded to extended between shots.

Adam:
Uh, Eve, this is Adam. Look, I just wanted to thank you for everything you did for me. And I wanted to tell you that I… that uh… that I wish so many good things for you. I wish so hard that all of your dreams come true, and… and that's all I… and that's all.

There surely is a lack of originality in movies now. Romantic comedies
always seem to have the girl outwit the guy, the guy persisting, and then
they finally get together. That's exactly the case in Blast from the Past,
except that the guy has been living in a bomb shelter for all of his life.
It's a joke that could work for a five minute sketch, or it might just flop
overall, but that's not the case here. It's a simple romantic comedy with a
huge twist thrown in, which works to the movie's advantage.


Adam (Brendan Fraser) had lived in a fallout shelter for all of his life,
because his father (Christopher Walken) thought a nuclear bomb was dropped
on the house. 35 years afterwards, Adam goes up to bring supplies and meet a
girl, which he does. Eve (Alicia Silverstone) is a feisty, typical 90's
American, but since Adam had never met anyone else besides his parents, he
just accepts it. Soon he falls in love with her (hence, Adam and Eve), but
the reverse is not the same. Will he convince her? Only the cliché on
romantic comedies will tell us!

Blast from the Past is surprisingly lightweight romcom. It never goes to
take itself seriously, which helps keep the mood light, which is what it's
supposed to be. At times it gets silly, including a Benny Hill-ish chase
scene, and the obligatory man-who-can't-drive-car-drives-car-wildly scene. A
scenario like this could easily descend into heartstring-plucking land, but
thankfully stays on the top, and over the top. Director Hugh Wilson, whose
resumé includes such movies as the original Police Academy and The First
Wives Club, can keep a movie that could turn drastically wrong on the right
track.

Fraser is great. It really seemed like he was brought up in a fallout
shelter. His mannerisms were all from the sixties, and the way he acted was
exactly on key. Silverstone was okay, but nowhere near as good as Walken and
Sissy Spacek as Adam's parents. They embody their roles as people who have
to live in the same space for 35 years. This movie is everything romantic
comedies today don't have: no crude humor, funny lines, good acting, and a
fun story. People could really learn a lesson from watching Blast from the
Past.