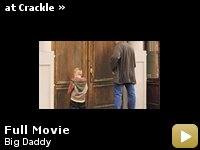 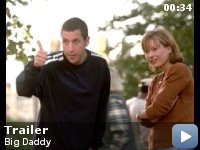 A lazy law school grad adopts a kid to impress his girlfriend, but everything doesn't go as planned and he becomes the unlikely foster father.

Storyline
Sonny Koufax is 32 years old. He's a law school graduate. He's got a nice apartment in Manhattan. There's just one problem. He does nothing, except sit on his butt and live off an investment that was the result of a meager lawsuit he won a year ago. But after his fed up girlfriend leaves him, he comes up with the ingenious idea to adopt a five year old boy to showcase his newfound maturity. But things don't go as planned, and Sonny finds himself the unlikely foster father that will change his perspective on just looking out for himself.

Adam Sandler provided the voice of the rollerblader who fell over a stick and yells "Goddamn stick!"

Continuity:
When Sonny is walking back to couch after tuning the television and says, "Let's do it, Rangers," he places his Pepsi behind the Chunk Chip bag. In the next shot when he says, "How you doing?" to Julian, the Pepsi is to the right behind the Cheetos Bag.

Sonny:
Don't worry about me making money. I'm in love with a woman who makes plenty of it. She'll be my sugar mamma.

Homeless Guy:
I gotta get me one of those.

It's hard not to like "Big Daddy", though diehard fans of Adam Sandler may
well cringe at this further step in the sentimentalization of the comic
actor. For although this film has raised the hackles of a number of
overly
sensitive worrywarts for its seeming endorsement of permissive parenting,
the film is, in reality, far more soft-hearted than hard-edged. Actually,
this seems to be, probably, the wisest direction for Sandler to go in at
the
moment because, as an actor, he conveys an aura of genuine likability that
fits well with his Average Joe persona. "Big Daddy" might have been a
better film if it had not given in so easily to sentimentality and
predictable emotional uplift, but Sandler's deadpan portrayal of an
immature
adult forced to grow up into responsibility-laden fatherhood makes the
film
relatively enjoyable.


Sandler portrays a 30-something loser living in South Manhattan, who has
been milking a minor foot injury to the tune of a $200,000 court
settlement
and whose life, consequently, consists of miniscule employment, a general
lack of direction, and a girlfriend who's ready to move on to an older man
with a "5-year plan". When a little boy suddenly shows up on his doorstep
(the hitherto unknown son of a friend of his), Sandler decides to
temporarily take him under his wing in the hopes of winning his girlfriend
back. Thus, a man with almost no resources of adult maturity attempts to
instill skewed life lessons into a willing, highly impressionable young
mind. This leads to Sandler's teaching the boy to indulge in predictable,
but surprisingly timid, antisocial behavior such as urinating on public
buildings, staying up late, tripping unsuspecting rollerbladers etc. The
film is not always at its peak of creative freshness at such times, but
Sandler's lowkey cynicism provides some humor.

As Sandler grows to care for his tot and the inevitable forces array
themselves against him to take the child away, the film veers off in the
direction of sappiness and maudlin tearjerking. One may be moved at
times,
but one also craves the satirical sharpness and bite that a more
courageous
screenplay might have provided.

The movie does display an enlightened view of gays (though Hollywood has
yet
to get past the point where gay characters can do more than merely twinkle
at each other), but it loses points for its rather nasty tone towards old
people. Still, any film designed to send Dr. Laura into spasms of
psychoanalytical outrage should be respected and honored.

Overall, "Big Daddy" is a movie that, if it had taken more audacious
pathways, might have been a firstrate comedy. As it is, it provides
numerous chuckles and a cuddly warm feeling – and that, given the state of
much of big screen comedy these days, is about all we dare allow ourselves
to expect.