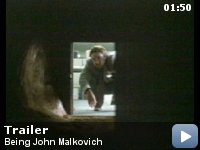 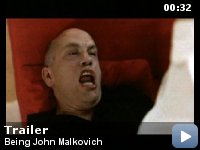 A puppeteer discovers a portal that leads literally into the head of the movie star, John Malkovich.

Storyline
Craig, a puppeteer, takes a filing job in a low-ceilinged office in Manhattan. Although married to the slightly askew Lotte, he hits on a colleague, the sexually frank Maxine. She's bored but snaps awake when he finds a portal leading inside John Malkovich: for 15 minutes you see, hear, and feel whatever JM is doing, then you fall out by the New Jersey Turnpike. Maxine makes it commercial, selling trips for $200; also, she's more interested in Lotte than in Craig, but only when Lotte is inside JM. JM finds out what's going on and tries to stop it, but Craig sees the portal as his road to Maxine and to success as a puppeteer. Meanwhile, Lotte discovers others interested in the portal.

Taglines:
Ever wanted to be someone else? Now you can.

Cameo:
[David Fincher]
Appears as Christopher Bing, when Craig is watching television through Malkovich toward the end of the film.

Incorrectly regarded as goofs:
When Maxine enters the lift on the 7 1/2 floor, it stops there when someone calls it (from outside), but from inside you have to stop it with the stop button because that's how it works.

Lotte Schwartz:
Craig, honey, it's time for bed.
[fade out and in]

Lotte Schwartz:
I'm sorry. I didn't know Orrin Hatch was out of his cage.

It is not every day that I use words in my movie reviews such as unique,
creative, inventive, imaginative, original, fresh, mesmerizing, and
unmatched. Under the circumstances of "Being John Malkovich," a wonderfully
hilarious presentation of an incomprehensible idea, I find myself using
every one of those phrases and then some more being deserved. Everything
about it is labyrinthine, intriguing, and very funny. It is one of the
years
best films, and should be well presented come Academy Award time.

"Being John Malkovich" details the relationship between Craig and Lotte
Schwartz. They basically live an old fashioned life in a small apartment
with a miniature zoo of pets and a puppet factory inside. Lotte is a
typical, unattractive homemaker while Craig holds that unusual occupation
of
being a professional puppeteer. Desperately searching for employment, Craig
soon visits a business for an interview as a filer when he discovers for
some odd reason the construction of the office floor is all but several
feet
tall, forcing all employees to bend over backwards just to walk around.

One of those employees is named Maxine, a highly seductive co-worker of
Craig's. When he asks her out for a beer one night, Craig experiences
lustful thoughts about her, and nearly begins an affair as his seemingly
loving wife wonders around her happy little apartment all by herself.

As you can see, the household isn't exactly a joyful situation. All things
change, from blossoming sexual confusion to inner self-esteem, when Craig
uncovers a small door behind a filing cabinet in his office. It is tucked
away, hidden acutely well in a dark corner, which is found mysteriously by
accident when Craig droops a paper behind the cabinet. After Craig explores
this deep miniature, seemingly endless hallway, he discovers this secret
door leads to the brain of actor John Malkovich for fifteen minutes, then
spits you out along the roadside afterwards.

Wow, sounds like "Alice in Wonderland," doesn't it…well, sort of. Craig
first tells his co-worker about his discovery, who continues to think he's
nuts. Then, after explaining and showing this portal to his wife, who is
hysterical, Maxine begins to believe Craig, and concoct a devilish idea. To
sell tickets allowing a pedestrian to enter the mind of a famous celebrity.
The tagline: Ever wanted to be someone else? Now you can.

It is very intriguing how the narrative point of view is juggled between
Craig and then Lotte after the problem is introduced and then solved: the
couples dead-end lives are lifted in glory. This creates a second conflict
moving us smoothly into the second act. Perfect internal problems are
created with the two female leads; Lotte and Maxine find themselves
physically attracted to each other in unbelievable character twists. The
two
end up having a femininity sexual relationship while one is entrapped in
the
mind of Malkovich, and the other experiences the actual Malkovich. It is a
beautifully crafted structure, with act breaks so clear and complications
so
faultless it is no wonder while this is such an effective picture.

Also first rate here are the performances. Although the film offers
strange
types of roles for these actors to indulge themselves in, they do a
wonderfully energetic job. Cameron Diaz is flawlessly cast as Craig's
sexually and mentally uncoordinated wife, and delivers us a comically
riotous character. John Cusack as Craig himself is superior and believable
as a down on his luck puppeteer, and possesses a perfect blend of humor and
unpredictable qualities with his character. Also quite good here, John
Malkovich, who has much more of a difficult role than one would think. He
has some hard scenes where Craig controls him while inside his mind, which
requires great skill to perform.

However, better than any performance, and more amazing then any flawless
characters or plot, is the concept of a human being thinking up such an
absurd idea as the imagination behind the beauty of "Being John Malkovich."
With such a penetrating, magical atmosphere to it, it is kind of a shame
that the filmmakers created this film in the form of a black comedy instead
of something more harrowing. Although comedy is simply the most logical
choice to categorize this type of film, wouldn't it have been interesting
to
see this movie as a drama, or perhaps as a spiritual awakening picture.

Regardless, the film still has an oddly powerful message to it, which I
will
not, nor do I ever directly reveal in any of my reviews. You see, since
different individuals come from different backgrounds, and thus see things
differently. It is because of this that I do not allow my personal take on
a
message persuade another filmgoer whose idea of a moral may be much
different than my own. But I will say that "Being John Malkovich" might not
overtake the box office, but for appreciative movie patrons, this one is
sure to be treasured for a long time to come.

Brought to you by Gramercy Pictures.