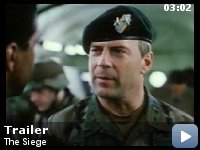 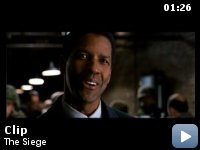 The secret US abduction of a suspected terrorist leads to a wave of terrorist attacks in New York that lead to the declaration of martial law.

Storyline
After the abduction by the US military of an Islamic religious leader, New York City becomes the target of escalating terrorist attacks. Anthony Hubbard, the head of the FBI's Counter-Terrorism Task Force in New York, teams up with CIA operative Elise Kraft to hunt down the terrorist cells responsible for the attacks. As the bombings continue, the US government responds by declaring martial law, sending US troops, led by Gen. Devereaux, into the streets of New York City.

Taglines:
On November 6th our freedom is history

According to an interview that screenwriter Lawrence Wright gave to CBS in 2007, the film was a box office failure upon its theatrical release, "but it was the most-rented movie in America after 9/11." Wright also claimed that the initial release bombed because "Muslim and Arab protesters picketed the theaters. They were furious at being stereotyped as terrorists."

Factual errors:
Twice, General Devereaux refers to "the president invoking the War Powers Act." The WPA is not presidential authority for allow war or the use of the military (which comes from Congress), but it is in fact a rule passed by Congress in 1973 (after Vietnam) that severely limits a president's ability to unilaterally use military force without Congressional authorization.

Senator:
You don't fight a junkyard dog with ASPCA rules. What you do is you take the leash off your bigger, meaner dog.

I remember hearing about this film before its release. It had caught a
great deal of flack for its use of Arabs and Muslims in particular as
violent extremists. Even at that time I knew that the protests against
this
film were nothing more than politically correct nonsense, as even then
the
only trans-oceanic terrorists that existed were of the fake-Muslim
variety
that today we hear about every hour.


When I saw the film, I was impressed by the fair nature of the film, in
that
it portrayed the truth: these extremists exist in the overwhelming
minority
of Muslims, and that it is unwise and unfair to paint them all with the
same
brush. With a very good script, excellent performances and exciting
action
pieces, I was impressed.

Jump ahead a few years, and we see what we have learned. This film was
not
just an intelligent story. It was a warning sign. It examined things
that
people did not want to talk about. It examined things that people
thought
it more politically correct to ignore. It portrayed events realistically
and in fact far less devastating than what was possible. If there is one
thing that can be learned by examining a film such as this in
retrospective
of recent events, it is that our species chooses to ignore that which it
does not want to accept.

Those who do not learn from their history are doomed to repeat it.
Perhaps
there are other subjects we should stop being so PC about and actually
talk
about instead of worrying about "how it will look."