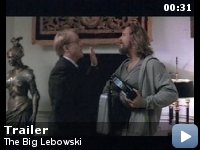 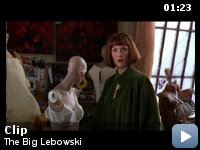 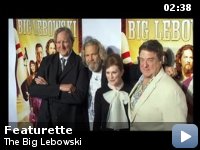 "Dude" Lebowski, mistaken for a millionaire Lebowski, seeks restitution for his ruined rug and enlists his bowling buddies to help get it.

Taglines:
It takes guys as simple as the Dude and Walter to make a story this complicated… and they'd really rather be bowling.

Recipe for making a White Russian: 2 parts vodka, 1 part coffee liqueur (such as Kahlúa) and 1 part cream. Served with ice in a low ball glass.

Continuity:
The first time The Dude's answering machine message is heard it says "leave a message after the beep, it takes a minute." Then there is a long pause before it beeps and Maude Lebowski leaves a message. When The Dude is smoking in his bathtub, LAPD calls and the same message is heard, but there is no delay before the beep.

The Stranger:
[voiceover]
Way out west there was this fella… fella I wanna tell ya about. Fella by the name of Jeff Lebowski. At least that was the handle his loving parents gave him, but he never had much use for it himself. Mr. Lebowski, he called himself "The Dude". Now…

You can watch it a million times, and yet, it will never get old

The Big Lebowski is the type of movie that is so funny, and so clever, you
want nothing more but to meet the Coen brothers, congratulate them
personally for their unique talent, and get inside their heads and find
out
what makes these two geniuses "tick". The main characters are Jeff
Bridges
(who plays such broad roles like The Muse, The Contender, and Sea
Biscuit),
John Goodman (who should have won an oscar for best supporting actor for
his
character, Walter Sobchak)Juliane Moore (Maude Lebowski)and Steve Buscemi
(who is unique in every Coen Brother movie).


The first time I saw this movie, I will admit that I enjoyed it, but did
not
fully appreciate its level of humor and raw talent. I thought the middle
section was a bit too depressing and long. But trust me, this is a movie
that gets more funny every time you see it, even if it's your thousandth
time seeing it. Its level of comedy, action, brutality, and vulgarity
become
that much more evident and important.

The characters are brilliantly written by the coen brothers, and,
likewise,
are brilliantly portrayed by the actors. The Big Lebowski is like no
other
film. It will make you laugh and it will make you cry. There is no other
film such as TBL that is sharp and witty all the way through. One of the
Joel and Ethan Coen's best, and one of the movie industry's best comedic
film of all time. You want to go see this flick.