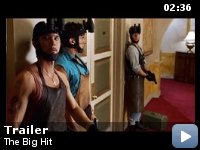 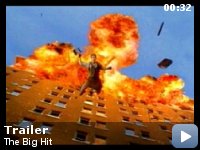 Storyline
Melvin Smiley, a successful young hitman, is living a normal all-day life for his jewish fiancé Pam, but kills for money in Paris' organization. In addition, he has a relationship with a beauty from the neighbourhood and gets bothered by a pimply video store guy, because he did not return "King Kong Lives" for two weeks. He and his three teammates Cisco, Crunch and Vince one day decide to kidnap the daughter of super-rich businessman Jiro Nishi – off the record. What they do not know, is that Jiro just went completely bankrupt due to a successless movie production, and, even worse, that his daughter Keiko is the god-daughter of Paris, the boss of the kidnappers. He and his men are now searching for the kidnappers in order to grind them up properly. Meanwhile, handcuffed Keiko falls in love with killer Melvin while both preparing a kosher meal in order to satisfy Pam's visiting parents, who are out of the house with Pam – with a body in the trunk.

As a practical joke on the set, Bokeem Woodbine stuffed the front of his pants with socks for the scenes that took place in the gym locker room.

Factual errors:
On the gun fight scene at the hotel where Melvin threw flashbangs on the room to blind and distract the enemy, the light from the flashbang lasts for a few minutes and he even wore sunglasses to protect himself from the blinding light before he enters the room. Whereas a real flashbang only lasts for a split second.

Melvin Smiley:
Technically, you can call me a hitman.

Keiko Nishi:
Really? A hitman? Does that pay well?

Melvin Smiley:
Oh of course. I make a killing.


Indeed Mark Wahlberg is a bit cack in most of his films, but The Big
Hit is a masterpiece of comedy. The action is fun, but is not meant to
be taken seriously. I think that some people might have watched this
film expecting a standard action film, in which case I can understand
their disappointment. It's just good fun and Lou Diamond Phillips is
brilliant. His over-the-top performance is perfect and is something
I'll never forget.


The Big Hit is one of those films where you either get it or you don't.
If you don't then I can understand how it might seem a bit
two-dimensional. However, anyone who hasn't seen it should take a
chance.

TagsCanada Paris
The Object of My Affection
Les Misérables