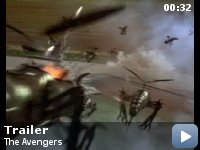 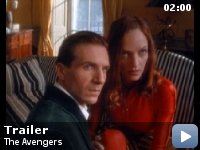 Storyline
British Ministry agent John Steed, under direction from "Mother", investigates a diabolical plot by arch-villain Sir August de Wynter to rule the world with his weather control machine. Steed investigates the beautiful Doctor Mrs. Emma Peel, the only suspect, but simultaneously falls for her and joins forces with her to combat Sir August.

Steed drives a 4.5 litre, 6 cylinder 1928 Bentley (reg. RT 4700). Emma owns an E-type Jaguar, reg. 439 OJX (after producers scrapped the idea of a Lotus Elan as in the original series); De Wynter runs a Rolls Royce and Bailey has a black Mini Cooper with chessboard roof.

Father:
How real do you feel, Mrs. Peel?

Not great, but not the horror everyone else describes

Frankly, when THE AVENGERS was released, I wanted it to bomb–I wanted
Hollywood to finally get the idea that ripping off old TV shows is
IMBECILIC
and almost never successful. Thus, I was happy that the movie did poorly
and
closed quickly. (I also took a trip to London just as the movie was
released, and if you think it was ill-received here, the British took it
times TEN.)


Ironically, though, it isn't that bad a movie. Not great, but certainly
not
the despicable mess that most others seem to think.

It's been called ridiculous, slow, talky, surreal. Well, what a shock, so
was the original series. I've recently viewed the entire 1967 season
(bought
all four boxed sets), and the show is all those things at times. It is
slow,
generally, at a very langorous pace throughout most stories. It is talky,
since most of the charm of the original was in the dialogue between
characters. It was surreal, even ridiculous (The Winged Avenger, anyone?
Eeee-urp.)

Uma Thurman does a passable job as Emma–she's no Diana Rigg, but who is?
She plays the character smart enough, although she doesn't quite capture
Rigg's regal command of situation. Ralph Fiennes, however, misses the
character of Steed quite a bit, playing him as reserved, without any of
Steed's charisma. Steed always had a quality about him that made you feel
as
if he woke up every morning feeling absolutely smashing–Fiennes seems to
miss that.

The problem the film faces is twofold: Those of us who have seen the
original will always compare the two, and a copy can't hope to compare.
Those who haven't seen the series have no grounds to assess it on–(see
some
of the above user comments which begin 'I never saw the original
series…')and since I think this series is not exactly vividly-remembered
by the majority of the population (particularly the 18 and under
movie-goers, who don't have much grasp of the nuances The Avengers
operated
on). Frankly, The Avengers was probably just a bad choice to try to
remake

(–LIKE ALL OLD TV SHOWS. Tell me one old-TV remake that has ever spawned
a
sequel (which Hollywood is always sure to do when something is a
success)–
only THE BRADY BUNCH…point proven?)