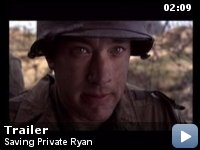 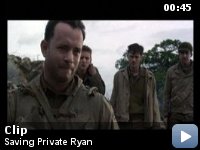 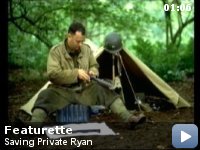 Following the Normandy Landings, a group of US soldiers go behind enemy lines to retrieve a paratrooper whose brothers have been killed in action.

Storyline
Opening with the Allied invasion of Normandy on 6 June 1944, members of the 2nd Ranger Battalion under Cpt. Miller fight ashore to secure a beachhead. Amidst the fighting, two brothers are killed in action. Earlier in New Guinea, a third brother is KIA. Their mother, Mrs. Ryan, is to receive all three of the grave telegrams on the same day. The United States Army Chief of Staff, George C. Marshall, is given an opportunity to alleviate some of her grief when he learns of a fourth brother, Private James Ryan, and decides to send out 8 men (Cpt. Miller and select members from 2nd Rangers) to find him and bring him back home to his mother…

Taglines:
The mission is a man.

The Omaha Beach scene cost $11 million to shoot and involved up to 1000 extras, some of whom were members of the Irish Army Reserve. Of those extras, 20-30 of them were amputees issued with prosthetic limbs to simulate soldiers having their limbs blown off.

Continuity:
During the D-Day landing after Capt. Miller puts his helmet back on while in the water the leather chinstrap is almost off of the rim of the helmet. The scene breaks to a soldier asking Capt. Miller what to do next. When the view goes back to miller the leather chin strap is completely on the rim.

LCVP pilot:
Clear the ramp! Thirty seconds. God be with ya!

I know it's fashionable to trash successful movies but at least be honest
about the trashing… Pvt. Ryan was fiction but it was pretty good
HISTORICAL fiction. The details were well thought out and based on reality.

There was nothing stupid about the portrayal of the German army… Rommel
DID blunder in his placement of force, The high command DID think Calais was
going to be the invasion spot, not Normandy. Hitler didn't wake up until
noon on that day and his aides were afraid to wake him. The Rangers did come
in right behind the first wave and did take a beach exit by sheer will to
get the hell off the beach. The bluffs were the scene of heavy close
fighting. The german defenders were mostly Eastern European conscripts from
defeated areas. (note that the 2 men that tried to surrender were NOT
speaking German). There WAS a young man rescued from interior Normandy after
his brothers were all killed. He WAS an airborne trooper (the difference was
that he was found by a chaplain and was removed from the front.)

The battles inside Normandy were small actions town to town, street to
street, house to house. Small actions like taking the radar station
happened. Small actions like a handful of men defending a river bridge
against odds happened. Small squads of men, formed out of the misdrops
banded together ad hoc to fight. There were all enlisted groups and all
officer groups. A General did die in the glider assault. FUBAR aptly
described much of what happened that day.

And there were only Americans in the movie because the Brits and Canadians
were many klicks away in a different area… this was Omaha beach. The story
was an American one. And Monty DID bog down the advance and everyone knew
it. And as for "American Stereotypes"… well those pretty much define
America: my college roomie was a wise-ass New York Jew. My best friend was a
second generation east coast Sicilian. My college girlfriend was a third
generation German. My first wife was French and English. I'm Irish, my boss
is Norwegian and I work with a Navaho… you get the point?

So much for it being bad history. It was in fact an excellent way to let a
jaded and somewhat ignorant-of-their-past generation *feel* something of
what their grandparents (LIVING grandparents) went through. It is perhaps
less important that the details be exact as the feel be right. Even now the
details are not fully known or knowable about that campaign… it was too
big, too complex and too chaotic to be knowable. There is not even an
accurate casualty count of D-Day itself.

Now as to the depth of characters. What I saw there was the extraordinary
circumstances into which ordinary people were thrown and what happened to
them. I saw the things that would mark a generation (I have heard in my
elderly male patients sentiments similar to what Cpt. Miller was expressing
when he announced his ordinariness) I saw the dehumanization that occurs
with war and its mitigation moment to moment, man to man… Cpt. Miller
didn't know anything about Ryan and he didn't care… until Ryan revealed
his humanity to him with his story of his brothers. Pvt. Reiban was ready to
walk out of the situation until he discoverd his captains ordinariness and
his humanity. Then he began to look to him almost as a father. Pvt. Mellish
rightfully delights in his revenge for all the times he's had to take it
because he was Jewish by telling German captives he's "Juden!" Nerdish Cpl.
Upham can stand alongside his bigger, stronger, braver Ranger compatriots
and describe the poetry and melancholy of Edith Piaf's song… then face his
cowardice, turn around and stand up in the face of danger and finally
demonstrate the dehumanization of the enterprise he was enmeshed in by
executing Steamboat Willie… even though Willie had no more choice about
being there than Upham did and in other circumstances would have made a
friend.

I could go on and on with this but enough already. OK, perhaps it is not The
Best Movie Ever Made but it is still a good movie. And if one will take the
blinders of fashionable negativism off they will see it. Finally, this is
not a patriotic story… if anything it is an acknowledgement and thank you
to all those old men still out there that did so much for us. To them I say
a deep and sincere thank you.

TagsFrance US
The Mask of Zorro
The Parent Trap