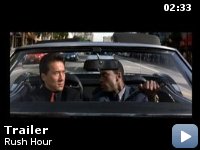 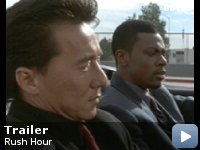 Two cops team up to get back a kidnapped daughter.

Storyline
Cultures clash and tempers flares as the two cops named Detective Inspector Lee a Hong Kong Detective and Detective James Carter FBI, a big-mouthed work-alone Los Angeles cop who are from different worlds discovers one thing in common: they can't stand each other. With time running out, they must join forces to catch the criminals and save the eleven-year-old Chinese girl of the Chinese consul named Soo Yung.

Taglines:
The Fastest Hands In The East Meet The Biggest Mouth In The West.

Elizabeth Peña played a prank on Brett Ratner in which she appeared on the set wearing nothing but her character's bomb squad vest. According to Peña, she thought Ratner would laugh and howl but instead he was extremely nervous and embarrassed.

Continuity:
When James Carter arrives to be briefed as an FBI agent, his Corvette has a mag wheel on the right front. The next time we see his car, it has spoked wheels all around.

Carter:
I'm still the law around, clean it up… and brush your teeth.

Chris Tucker at his best!


Chris Tucker and Jackie Chan, the best comedic duo since Lethal Weapon
bring us Rush Hour. A classic action movie that brings great action as
well as awesome comedy that makes you laugh every minute. Chris Tucker
has always been one of my favorite comedians, even before I saw Rush
Hour, so it was great to see him in Rush Hour. I know a lot of people
find him annoying, but I thought he was just so funny. He showed off
his talents in Rush Hour. Not only him, but this is the film that is
making Jackie Chan into a world wide super star. His stunts are simply
incredible. Rush Hour is one of those very fun action/comedy movies
that I'm sure you'll enjoy if you love movies like Lethal Weapon or 48
Hours. The story was just pure entertainment and really kept me on the
edge.


Lee is a body guard to the Chinese ambassador and is also a close
friend, he also is a teacher to his daughter, Soo Yong. The ambassador
goes to the United States with his daughter, but she is kidnapped by an
evil man of the Chinese Consol. They want 50 million dollars in return,
but the ambassador thinks that Lee should be involved, so he sends for
him, but the F.B.I. doesn't want him near the case. So they hire
L.A.P.D. screw up, James Carter, to babysit him. But together, the
fastest hands in the east meets the fastest mouth in the west, they
must learn to work together despite their complete opposite
personalities and get the girl back.

Rush Hour is a guaranteed classic down the lines somewhere, I'm sure.
It's already spawned a sequel and it's been a success. Chris and Jackie
are such a great team, I was really impressed with their chemistry. My
favorite scene is where Lee plays "War" by Edwin Starr in Carter's car,
and he doesn't know how to say the lyrics correctly, and Carter shows
him some moves, it was such a classic scene that brought me down to the
floor laughing. I highly recommend Rush Hour, it's all in good fun and
it'll give you more than a few good laughs.