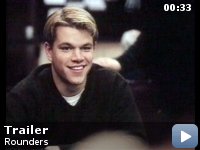 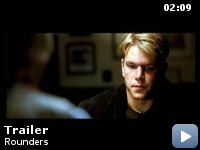 A young man (Damon) is a reformed gambler who must return to playing big stakes poker to help a friend pay off loan sharks.

Storyline
A young man (Damon) is a reformed gambler who must return to playing big stakes poker to help a friend pay off loan sharks.

Taglines:
Pick a card, any card

Matt Damon and Edward Norton played the $10,000 buy-in Texas Hold 'Em championship event at the 1998 World Series of Poker in Las Vegas. During the first of four days, Matt Damon had pocket Kings and was knocked out by former world champion and poker legend Doyle Brunson who held pocket Aces.

Continuity:
When Worm and Mike go over to Gramma's place, Worm is chewing a cocktail stick the whole time which he throws away when he begins to yell at Gramma. Gramma promptly grabs him by the collar and the cocktail stick is back in his mouth again.

Mike McDermott:
Listen, here's the thing. If you can't spot the sucker in the first half hour at the table, then you ARE the sucker.

One of the most widely underrated movies of our time


Rounders is I believe, one of the most widely underrated movies of our
time.

I first saw this movie as it was a 'bonus DVD' thrown in for free with
my DVD player back in 2000, so naturally I didn't expect much (as the
other bonus DVD's were very mediocre), but what I found was a very
enjoyable movie.

At that stage in my life, I had only played a little poker as a child
growing up, and never 'Texas Hold'em' so to be honest, a lot of the
terminology went 'over my head', but even so, the film became an
instant favorite of mine purely because of the performances.

The film has so much star power, and yet none of the fine actors try to
'steal' scenes. Damon, Norton, Malkovich, Landau … and then the fine
supporting cast of Turturro, Jansen, and Mol.

In fact, there is a scene with Martin Landau and Matt Damon that is
perhaps one of the most beautiful performances I have seen in a long
time between two very fine actors.

So even if you're not a poker player, the story is tighter than a lot
of Hollywood 'pop fluff' and the performances alone can sell the film
as an enjoyable movie capable of multiple viewings.

But … if you start playing poker and get really into what they are
talking about, and reading about poker theory (like Doyle Brunson's
book Super System) then the movie moves up to a whole different level.

A lot of the time, Hollywood will attempt to cover a specialized error,
and usually fail, or at best only partially succeed, whereas Rounders
managed to get everything 'spot on', just look at the US DVD, it has a
commentary track from 4 World Champion Poker players, if that's not a
stamp of approval then I don't know what is.

When you factor in how the film can be enjoyed by someone who has
little to no idea about Poker (as I did when I first saw the film) just
because of the tight story and stellar performances and also be
'immortalized' by poker enthusiasts as the best movie ever made on the
subject (and truth be told, a big reason why the World Series of Poker
has been doubling it's entries year after year) … what you have here
is a true gem that works on so many levels and what I believe is, as I
said initially, one of the most widely underrated movies of our time.

TagsUSA
All I Wanna Do
One True Thing