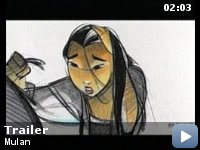 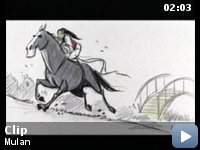 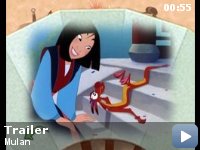 To save her father from death in the army, a Chinese maiden secretly goes in his place and becomes one of China's greatest heroes in the process.

Storyline
This retelling of the old Chinese folktale is about the story of a young Chinese maiden who learns that her weakened and lame father is to be called up into the army in order to fight the invading Huns. Knowing that he would never survive the rigours of war in his state, she decides to disguise herself and join in his place. Unknown to her, her ancestors are aware of this and to prevent it, they order a tiny disgraced dragon, Mushu to join her in order to force her to abandon her plan. He agrees, but when he meets Mulan, he learns that she cannot be dissuaded and so decides to help her in the perilous times ahead.

Taglines:
The flower that blooms in adversity is the most rare and beautiful of all.

The third Disney score from Jerry Goldsmith after
One Little Indian and
Night Crossing. It was also his last Academy Award nomination.

Continuity:
When Mulan changes into a man, the ribbon in her bun changes color from green to brown and other colors and then back to green.

Yao:
[at the waterhole]
Hey, Ping.

Ling:
Come back here! I knew we were jerks to you before, so, let's start over. Hi, I'm Ling.

Yao:
[standing naked on a rock]
And I am Yao, king of the rock!
[mildly sneering]

Yao:
And there's nuttin' you girls can do about it.

Ling:
Oh, yeah? Well, I think Ping and I can take you.

Mulan:
I really don't want to take him anywhere.
[…]

Why Mulan sticks out as a great Disney film.


I was impressed by this Disney film for so many reasons, too many to
list here, but I will go on the record as saying that Mulan has got to
be one of the best Disney female characters that ever saw production,
in the midst of a colorful and artistic film, that will resonate in
your memory.


Mulan sticks out in my mind for this reason. For once, we have a strong
female lead, or at the least, stronger than most of them. She isn't
counted among the Disney "princesses" line-up. She doesn't want for
herself, and she seeks to look deeper within herself to discover her
inner being. She isn't like Ariel, who wants to be someone else. She
isn't like Jasmine, who sits in luxury, waiting to be swept off her
feet by Prince Charming, just like Snow White, Cinderella, Sleeping
Beauty, and almost any female character that Disney brings to life. And
while she does share some traits among this list, she stands out
because she does something that these do not. She uses her mind.

Mulan, in fact, has more in common with male Disney leads than the
female Disney leads. Mulan is a thinker, and a do-er. She's
resourceful, like Aladdin. She is quick to act, like Eric (mermaid.)
And she sacrifices herself for the sake of others, like Hercules. She
also speaks her mind, even in a culture that does not allow such a
thing. She doesn't waste time pining about "will I ever find true
love?" Indeed, we see that she has an attraction to Shang (as he was
her husband in the legends,) but we see her uncomfortable and unsure of
meeting the Match-maker. She begs for her father's life when Chi-Fu
came to the village. When you see her make her decision to take her
father's place in the army, she does so out of her love for him,
valuing his life above hers. She doesn't wish to become a man to see
what it is like or for a change. Only to save his life. She later
doubts herself and her reasons for going, but she did so because of her
inner strengths, something other female Disney leads too often lack.
(And it is these strengths that Shang is attracted to at the end.)

This movie also has a simple, but very effective villain, Shan Yu.
Though not as memorable as Jafar or Ursula, he is more effective and
more menacing because he is not fantastic. By that, I mean that he is
not magical, he holds no special power. He is portrayed as a man, and
as a man that could have truly existed, performing vicious acts that
men do. We see the destruction that his army lays to a village, and
when Mulan finds the doll, it shows that Shan Yu left no one living,
man, woman or child. This is what makes him so effective as a villain,
showing how truly human he indeed is. Granted, the producers did not
develop him in any great depth, but they showed enough of him to remind
us of his threat to China. Besides, sometimes the better villains are
the ones you don't know too much about, or see a lot of.

Of the rest of the supporting cast, I will only mention four of them as
being memorable in any real way. Chi-Fu, the emperor's consultant, was
a reminder of the way many men looked at women in this culture. He
thrusts his head up when Mulan begs for her father's life, and when she
is discovered to be a woman, though she is a hero, he is quick to
insult her, and to order her execution, simply because she impersonated
a man. The other three were, of course, her comrades, Ling, Yao, and
Chian Po. Though they were mainly comic relief (almost like a 3 stooges
set,) they remained loyal to Mulan and trusted her fully, even after
she was discovered. I like them, because they were not discriminatory
to her in any way, even trying to stop her execution. When Mulan told
them she had an idea to help the emperor faster, they were the first to
her side, even when Shang was still reluctant to do so.

Overall, a wonderful movie to the Disney list. If you haven't seen it,
then do so, you won't regret it.

And yes, Mushu was a cool character as well.

**** In Response to an earlier post by Phoenix-1 **** To expect any
movie to accurately portray history in any way is lunacy. Even those
movies that come close to historical accuracy are flawed in many ways.
This was a way of telling a story, as any movie is. It can be argued
that it tries to provoke curiosity in another culture, but it is also
meant to entertain. I would also like to point out that Mulan is really
not "historical," like Joan of Arc, but rather she is a legend, much
like Hercules and Aladdin, who also come from the realm of myth,
stories and legends. And while there is some difference between the
original legend and this movie, your examples of how Disney would
butcher tales of George Washington and Abraham Lincoln do not compare
to this story in any way. Your arguments for comparison should be
better applied to Pocahontas, as she was an actual historical figure.