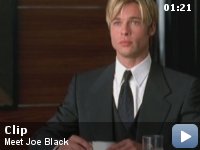 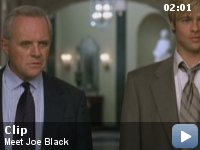 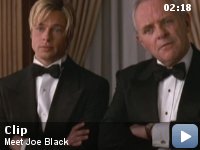 A media mogul acts as a guide to Death, who takes the form of a young man to learn about life on Earth and in the process, fall in love with his guide's daughter.

Storyline
Bill Parrish, media tycoon, loving father and still a human being, is about to celebrate his 65th birthday. One morning, he is contacted by the Inevitable – by hallucination, as he thinks. Later, Death itself enters his home and his life, personified in a man's body: Joe Black has arrived. His intention was to take Bill with him, but accidentally, Joe's former host and Bills beautiful daughter Susan have already met. Joe begins to develop certain interest in life on earth as well as in Susan, who has no clue who she's flirting with.

The part played by Anthony Hopkins was originally slated for Gene Hackman.

Continuity:
When Quince is talking to Joe before the party, his wine glass jumps from hand to hand between shots.

Allison:
It's utter chaos around here. And I'm terrified we're running out of time. Am I trying to be too perfect?

A three hour film about death. It doesn't sound like much when you say it
like that, but trust me, Meet Joe Black is an outstanding film and is
without doubt one of the most underrated little gems I have ever seen. The
film is beautiful in every regards; the photography, the sets, the music and
the performances, especially the performances. The last time Anthony Hopkins
and Brad Pitt were on screen together it was the equally sublime Legends of
the Fall, here it is another sublime film and once again they are putting in
some of their best work. The characters that they play, Bill Parrish and
Death, bring out a fantastic chemistry between the two performers,
especially in the more comedic moments when they two are getting to know
each other. However, while death is the main theme of the film, director
Martin Brest remembers to filter optimism into his wonderful tale in the
shape of a love story between Parrish's daughter (played by the beautiful
Claire Forlani) and Death himself. This results in one of the most gorgeous
coupling in recent years as well as one of the most erotically intense love
scenes I have ever watched.


Director Brest presents the film in a more artistically filtered view than
most other directors might have done. The love scene is done without nudity
with close ups on the actors throughout. The striking presentation of the
lighting in the film is also fantastic, with a lovely golden glow pouring of
the screen and lastly Thomas Newman's music is quite simply marvelous. Films
like The Green Mile, The Shawshank Redemption and American Beauty which have
featured music by this outstanding composer have been enhanced by the
haunting, lyrical and moving melodies he has composed and this film is no
exception. The mixture of piano and orchestra builds to an uplifting and
emotional pull that cements his position as one of the best music composers
working in modern film today.

The three hour running time would appears to be problematic, but alas it is
not. In fact like another sweeping romantic epic, Titanic, you will not feel
the time going in. The three hours fly by and not only that, like the Oscar
winning epic, this is a film that makes one instantly want to re-watch it
again and again. Meet Joe Black is a wonderful mixture of comedy, romance
and drama and is done exceedingly well. Brad Pitt puts in one of his finest
performances as Death finds himself enchanted by human emotions and then
finds himself making a deeply human choice at the end of the film and then
there is Hopkins. One of cinema's finest actors no matter what he is in, he
shows with his complex range of emotions in his performance there is more to
him than playing Hannibal Lecter. His performance here restrained and quite
frankly very well done. It is perhaps one of his best acting performances.
His Shakespeare background obviously coming in handy for a film that
contains many a Shakespearean like moment.

The film, while not a flop, was not the box office hit that was expected,
especially considering the main casting, but if you can make up your own
mind, do watch Meet Joe Black. This is a wonderful film and is a personal
favorite of mine.