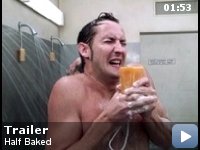 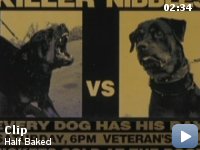 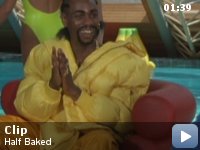 The story of three not so bright men who come up with a series of crazy schemes to get a friend out of jail.

Storyline
After Kenny accidentaly kills a cop's diabetic horse by feeding it the food he purchased from a munchie run, he is put in jail and is given a 1 million dollar bail. The rest of the group must bail Kenny out before Nasty Nate gets to him. The group decides to sell marijuana that Thurgood gets through his job as a janitor at a pharmaceutical lab. They become pals with rap star Sir Smoke-A-Lot and the rivals of dealer Samson Simpson. On the side, Thurgood seeks the love of Mary Jane, an anti-pot daughter of a dealer. What follows is typical pothead behaviour with a ton of cameos. Look carefully.

Taglines:
Warning: this movie may cause the munchies, cotton mouth, and memory loss!

When Thurgood and friends are watching Sir Smoke-A-Lot's video, "Samson Gets Me Lifted", the video's director is listed as Tamra Davis.

Audio/visual unsynchronized:
When Brian, Kenny, Scarface, and Thurgood are in a convenience store in the beginning of the movie, Brian is holding his head, asking everybody if they're OK. When we hear him say, "How you doing. Kenny?", his mouth doesn't move.

Thurgood Jenkins:
It was the summer before 9th grade, and there was me, Brian, Kenny, Scarface, and of course the lovable Old James… hold on, wait a minute… Old James… Old James wasn't there… I don't even know nobody named Old James.
[Old James disappears]

A great comedy, Chapelle is hilarious


Half baked is hilarious movie to me. Its a pothead manifestation film
that doesn't take it self seriously and is pretty hilarious throughout.
Dave Chapelle is very funny in the lead and to me is a better lead
comedy actor than the likes of Martin Lawrence and even Chris Rock.
Guillermo Diaz is also very good as Scarface. Rachel True provides good
eye candy and decent performance as the female lead. This is not an
Oscar film, but hilarious to watch with buddies and after watching it 3
times it doesn't get old. Its a funny screenplay, decent comedic
direction and good performances, worth a look for any fan of comedy,
pot or cinema.. 9/10

TagsUSA
Wag the Dog
Jackie Chan's Who Am I?