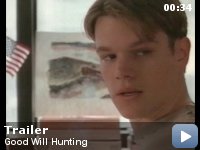 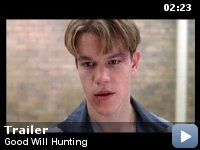 Will Hunting, a janitor at MIT, has a gift for mathematics but needs help from a psychologist to find direction in his life.

Storyline
A touching tale of a wayward young man who struggles to find his identity, living in a world where he can solve any problem, except the one brewing deep within himself, until one day he meets his soul mate who opens his mind and his heart.

Taglines:
Some people can never believe in themselves, until someone believes in them.

Continuity:
When Gerald and Sean are arguing in Sean's office, the picture of the boat is missing. When Will enters and catches them mid-argument, the picture is back in the window.

Lambeau:
Mod fx… squared… dx. So please finish Parceval, by next time. I know many of you had this as undergraduates, but it won't hurt to brush up.

Beautiful in its own way.

There's one thing about Hollywood – you can't stop the hype. I think it was
the hype that gave this movie the bad reviews by some IMDB users, as let's
face it, it can totally ruin a movie for some people.

In "Good Will Hunting", you have to look past the hype and Oscars and see
that it really is a gorgeous film written by two very talented young men,
and acted out by proficient actors such as Robin Williams and Stellan
Skarsgard. Personally, I thought the plot was an excellent idea – maybe
someone else could have thought of it, but could they have provided the
great script? And as for the profanity – yes, there was a lot, but I don't
give a damn! This is real life! People swear! Deal with it!

Anyway, what I really enjoyed about "Good Will Hunting" was the
psychological aspect – very believable. Here you have this "typical" 21 –
year – old, drinking with his friends, getting into fights, etc etc, but
you
look below the surface and there's a lot more to him. I think this really
tells us a lot about the people around us and makes a point about looking
below the surface. This aspect of the movie also revealed a lot of
sociological issues – yes, it IS believable that there is a genius in a
rough suburb of Boston, repressed by his upbringing. (Hey, my mum even says
so, and she teaches sociology!)

I enjoyed the acting a lot, especially by Robin Williams – I had been too
used to seeing him in cutesy films, so this was definitely a refreshing
change. I feel he plunged right into the part and relished it, although
something told me his accent wasn't quite right! Will's relationships with
the people around him are wonderful to watch, especially with Skylar
(Minnie
Driver) – there was real chemistry between them. I also liked to watch how
Will behaved around his buddies; the four guys really seemed as if they had
known each other all their lives.

Overall, I thought this movie was believable and touching, without your
typical ending. Matt Damon and Ben Affleck really have done themselves
proud. My advice: Forget the Oscar nominations, the rave reviews, the
famous
faces, and sit down to watch this movie with a completely impartial
attitude. You will see that it really is beautiful.

By the way, I very VERY rarely cry at movies. But if there's any scene that
will have me in tears, it's the one where Will finally breaks down and
starts to cry. That's saying something!