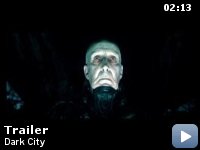 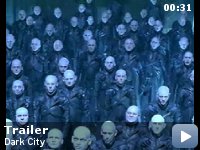 A man struggles with memories of his past, including a wife he cannot remember, in a nightmarish world with no sun and run by beings with telekinetic powers who seek the souls of humans.

Storyline
John Murdoch awakens alone in a strange hotel to find that he has lost his memory and is wanted for a series of brutal and bizarre murders. While trying to piece together his past, he stumbles upon a fiendish underworld controlled by a group of beings known as The Strangers who possess the ability to put people to sleep and alter the city and its inhabitants. Now Murdoch must find a way to stop them before they take control of his mind and destroy him.

The main character, John Murdoch, shares the name, and the quest, of a Scottish liberal in the 1870s and 1880s. The Scottish Murdoch led a major campaign for Scottish farmers to own their own land.

Audio/visual unsynchronized:
The band playing in the beginning has an upright bass-player, but the sound is clearly that of an electric bass-guitar. The playing style is also not true to an upright. The sliding note might give this impression, but the other notes are simply to light-touched to be an upright.

Dr. Schreber:
[voiceover]
First there was darkness. Then came the strangers. They were a race as old as time itself. They had mastered the ultimate technology. The ability to alter physical reality by will alone. They called this ability "Tuning". But they were dying. Their civilization was in decline…

I think Alex Proyas had a stroke of genius in the making of this movie. One of the most original dark sci-fi movies I've seen in a long time.

John Murdoch (Rufus Sewell) wakes up in an eerie hotel, naked and in the
bathtub, with no memories and blood on his forehead. (I couldn't imagine a
more strange and frightening experience.) The ring of the hotel phone
breaks
the silence– a strange man on the other end tells him he must leave
because
there are people looking for him. Many events such as this one unfold in
Dark City, where "man has no past… and humanity has no
future".

Dark City has been passed over by so many critics it's depressing. I think
that it should at least have been up for "original screenplay" or SOMETHING
at the Oscars to reward Alex Proyas for his fantastic vision. I fail to see
why so many people label this movie "noir" like it's BAD or something.
Being
dark and twisted is not a crime, and despite some other people's comments,
this movie is NOT just for the trenchcoat-wearing masses (or if it is,
maybe
the rest of you can learn something from Goths). If you like sci-fi, dark
plots and having reality be so well distorted that you don't realize it IS,
so you will love Dark City. (People who have seen the Matrix BEFORE this
movie MUST see it, it is very similar in these three respects).

I gave it a 9 out of 10 ONLY because I thought the ending fight scene was a
bit weak. Great for a fight scene, but because the rest of the movie
focuses
on John Murdoch's quest to discover his past and the eerie, ominous
happenings in the city, the climax seemed hastily thrown together, as if
the
crew all of a sudden remembered they had a deadline to meet and could no
longer continue the plot in the previous fashion.

The visuals in this movie were absolutely stunning. The effects were NOT
used to substitute for the plot, like other movies such as Starship
Troopers, Lost in Space and Alien: Resurrection. They were used only as
needed and were breathtaking. The editing is NOT as choppy as is rumored,
it
only lends to the power of the movie. There are some heart-stopping images
in Dark City. Watch for the Strangers' clock, views of the city and John's
memories.

Proyas takes ideas and ambience from many other movies but integrates them
all neatly into Dark City. Gotham City is clearly seen as is Metropolis and
other influences such as Ed Hopper's "Nighthawks" dominate in the diner
scenes. The forty-ish era (yet strangely futuristic) city is known to be
populated, and yet it is ominously empty (hence one of Hopper's main
themes,
isolation in large cities). (It's especially quiet at midnight, hehehehe…
;D ) This 40's era ambience together with the sci-fi fantasy undercurrent
makes for a very interesting feeling while watching.

I'm happy that Kiefer Sutherland, Richard O'Brien (of Rocky Horror fame)
and
William Hurt agreed to do this movie, it gave Dark City just that much more
validation in the USA (I wish things weren't like this, but they are).
Kiefer Sutherland is absolutely wonderful and convincing as the
doctor/scientist Dr.Schreber, and Rufus Sewell is a properly confused yet
determined John Murdoch. Many critics say that William Hurt's character,
the
detective, and Jennifer Connelly's Emma Murdoch could have used a little
more development, but I think part of the point of Dark City was that you
don't really know who people are (not to mention yourself). Richard O'Brien
and his character's whole race creep me out every time I see the movie, but
he's especially frightening and a strange character. I had to resist the
urge to talk like a Stranger after seeing the movie a few times.

Trevor Jones, one of my favorite movie composers, did the score for Dark
City, and I must say it's very apropo. The deep, bass vocals and frantic
themes are some of my favorite aspects, but "Memories of Shell Beach" is a
haunting, beautiful song as well. Some of my other favorite scores by him
are the Dark Crystal and Last of the Mohicans.

Altogether, I think Alex Proyas had a stroke of genius in the making of
this
movie. One of the most original dark sci-fi movies I've seen in a long
time.
It deserves its place with the Matrix, 12 Monkeys and others, pioneers in a
field so changed (usually for the worse) since Star Wars and since earlier
sci-fi classics. I hope these won't be the last of a (dare I say it?) dying
race of movies that have true creativity and originality.