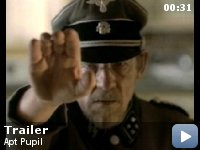 A boy blackmails his neighbour after suspecting him to be a Nazi war criminal.

Storyline
Neighborhood boy Todd Bowden (Renfro) discovers that an old man living on his block named Arthur Denker (Mackellan) is nazi war criminal. Bowden confronts Denker and offers him a deal: Bowden will not go to the authorities if Denker tells him stories of the concentration camps in WWII. Denker agrees and Bowden starts visiting him regularly. The more stories Bowden hears, the more it affects his personality.

Taglines:
If you don't believe in the existence of evil, you've got a lot to learn.

Incorrectly regarded as goofs:
Some question Dussander's description of carbon monoxide gas being introduced to gas chambers through pipes, pointing out that Nazi extermination camps used Zyklon B pellets dropped through openings in the roofs of the chambers, which then released prussic acid (hydrogen cyanide) gas. While the largest extermination camp, Auschwitz II-Birkenau, did use the Zyklon B method, most of the other major extermination camps (Belzec, Sobibor, and Treblinka II) used large gas or diesel engines to produce carbon monoxide exhaust, which was then routed to the gas chambers through pipes. (The Chelmno camp had no gas chambers, instead using gassing vans, in which the vans' own carbon monoxide exhaust was routed to the cargo portion of the vans, which held the victims.)

Kurt Dussander:
Boy, be careful. You play with fire.

The only thing more frightening that having the Holocaust as part of our
world's long history is to know that are human minds capable of creating and
sustaining such an oppression. The real horror of Bryan Singer's adaptation
of Stephen King's novella "Apt Pupil" lies in that we have this knowledge.
We know that Adolf Hitler possessed the powers of immense manipulation and
charisma. This has been so ingrained into our heads that I remember as a
child knowing that Hitler was charismatic before I really knew what the term
meant. This film is an exploration into the mind of a person who conceivably
has many of the same manipulative characteristics. In the progression of the
film, we slowly learn why.


Before any images actually come on screen, we hear the voice of someone
asking if the Holocaust occurred as a result of economic or social cultural
reasons. Or was it in fact, human nature? We then realize that the monologue
is being given by a school teacher in a social studies class. The principle
character, Todd Bowden (Brad Renfro), a member of this class and is
fascinated with studying the Holocaust. He spends much time in the library
reading books and newspaper articles on the subject. Just as the opening
credits finish, the camera zooms in slowly to the eyes of a concentration
camp leader. This is the first of many extreme close-up shots of eyes. This
distance motif is incredibly effective. The eyes are the window to a man's
soul and the psyche that "Apt Pupil" explores.

One rainy night, while Todd is riding the bus, he sees a mysterious man, who
he realizes is Kurt Dussander (Ian McKellan), a Nazi war criminal and
concentration camp leader who managed to escape from Germany years before.
This is when we really begin to see Todd's disturbed mind. He is the kind of
person who is so meticulous that he finds fourteen finger print matches of
Dussander and builds a file that will be sent to the Israeli government if
he doesn't agree to tell stories about the Holocaust that "they are too
afraid to tell in school". It is now clear that Todd is not so fascinated
with the Holocaust because he's racist (the film makes no reference to him
being racist). He admires the power, dedication and will behind the driving
force of the Holocaust. He mimics this power in his blackmailing of
Dussander.

The scenes with Dussander explaining in explicit detail the acts that he
performed in concentration camps are quite disturbing in themselves, but
what is more disturbing is that Todd seems more detached than Kurt. Most of
us would cringe in disgust if we were to sit and listen to the stories that
Kurt tells. We get the impression that Todd is thrilled with the fact that
he is able to control this man and make him relive his
past.

In the film's most harrowing scene, Todd brings Kurt an officer's uniform,
similar to what he would have worn during the War years, and makes him
march. Up until this point, we are led to believe that perhaps Kurt has had
some time to develop remorse over the years for his haneous acts of
brutality, but when Todd begins commanding him, Kurt fades to the same state
of mind of his Nazi persona from the past and we see the man capable of
ordering concentration camp personnel to gas hundreds of Jews. The scene is
truly chilling and stands out as the most memorable in the
film.

"Apt Pupil" is occasionally slow, but never boring. I, for one could not
take my eyes off the screen for a second. The power struggles between Todd
and Kurt are always intense. The sequence of events leads up to a horrifying
scene with Todd and his guidance counselor (David Schwimmer). Here, we learn
of the lengths that Todd will take his manipulation. "You can't do that,"
the guidance counselor says. "You have no idea what I am capable of doing,"
replies Todd. This line of dialogue is very effective. We know from having
seen the rest of the film that Todd is capable of quite a lot. While not as
powerful or intense as Stephen King's novella, the film "Apt Pupil" gives us
a creepy insight to the corruption of power and manipulation.