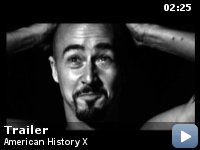 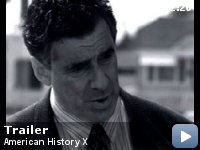 A former neo-nazi skinhead tries to prevent his younger brother from going down the same wrong path that he did.

Storyline
Derek Vineyard is paroled after serving 3 years in prison for killing two thugs who tried to break into/steal his truck. Through his brother, Danny Vineyard's narration, we learn that before going to prison, Derek was a skinhead and the leader of a violent white supremacist gang that committed acts of racial crime throughout L.A. and his actions greatly influenced Danny. Reformed and fresh out of prison, Derek severs contact with the gang and becomes determined to keep Danny from going down the same violent path as he did.

Taglines:
His father taught him to hate. His friends taught him rage. His enemies gave him hope.

The quotation that concludes Danny's paper is from the closing words of Abraham Lincoln's first Inaugural Address in 1861.

Continuity:
In the first flashback where Derek has fired at the car and is returning to the guy he shot, he leans down with the pistol in his hand, as if to pistol-whip the guy. In the second flashback, it shows the same scene with Derek approaching but this time, when he gets to the guy, he just drags him into the street.

Bob Sweeney:
This racist propaganda, this "Mein Kampf" psychobabble; he learned this nonsense, Murray, and he can unlearn it too. I will not give up on this child yet.

Based on a true story


Not many people know this, but Ed Norton's character, Derek, is based
on an actual person — a guy that went to my high school a few years
before I did. He comes to speak every year at an anti-hate assembly.
They show us clips of the movie (in my case, my English teacher let us
watch the whole thing) and then he comes out and speaks. It's bizarre,
to see him because he sounds exactly like Derek does after he gets out
of prison. He's genuinely remorseful and what most people don't
realize, is what a life-change that really is. Most Neo-Nazis and
extreme racists are practically brainwashed in their points of view. It
can take years, even lifetimes before they can be broken out of these
harmful, violent mindsets. The movie seems slightly unrealistic in that
way, that someone as intelligent and seemingly brainwashed as Norton's
character, could make such a change from a short stint in prison. Well
as I can firsthand tell you, it is possible, and the transformation did
really happen. I can't remember the guy's name to save my life, but
having that knowledge of the film and the people it's based on has made
me appreciate this movie even more.


On a whole other side level, yet another amazing performance by Ed
Norton. This man never ceases to shock and amaze me with his range and
ability to adapt physically to any role thrown at him. I'm sure he
wasn't the first choice for this role, I can think of plenty of other
All-American looking actors that would seemingly fit better, even
Furlong seems better fit to the Neo-Nazi role than the Norton we all
know. However with a beefed-up physique and a well-written film to back
him up, Norton shines in this role.

TagsUSA
The Legend of 1900
Gods and Monsters