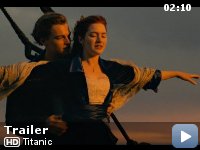 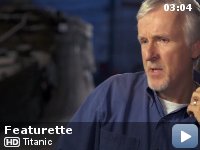 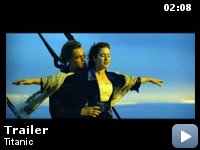 A boy and a girl from differing social backgrounds meet during the ill-fated maiden voyage of the RMS Titanic.

Storyline
84 years later, a 100-year-old woman named Rose DeWitt Bukater tells the story to her granddaughter Lizzy Calvert, Brock Lovett, Lewis Bodine, Bobby Buell and Anatoly Mikailavich on the Keldysh about her life set in April 10th 1912, on a ship called Titanic when young Rose boards the departing ship with the upper-class passengers and her mother, Ruth DeWitt Bukater, and her fiancé, Caledon Hockley. Meanwhile, a drifter and artist named Jack Dawson and his best friend Fabrizio De Rossi win third-class tickets to the ship in a game. And she explains the whole story from departure until the death of Titanic on its first and last voyage April 15th, 1912 at 2:20 in the morning.

Taglines:
Nothing On Earth Could Come Between Them.

Anthony Higgins turned down a role in this movie to do a play.

Incorrectly regarded as goofs:
Although her fingers partially obscure it, the coin that Rose gives to Jack is generally agreed to be a Barber dime, minted 1892-1916, not a modern dime as some viewers have incorrectly asserted. The Barber dime is distinctive because the portrait of Liberty on the head of the coin faces the right, not the left.

Brock Lovett:
Thirteen meters; you should see it.

Brock Lovett:
[seeing the shipwreck come into view for the first time]
OK; take her up and over the bow rail.

A Movie People Love To Hate

As with most things in life, people always force their own opinions to be
different so they can feel good about themselves. Titanic is another
example. This is a great movie. It's not boring, and the storyline might
be
cliché but it's still beautiful and really sad, and almost got me crying.
The only movie that made me cry was Bambi, when I was 4 years
old.


Apparently, people are only allowed to like the second part of this movie,
when everyone is dying. And even though that part is in my opinion one of
the best moments in the history of movies, the first part is also really
good, a gorgeous tale about a romance that couldn't be. It might not add
up
to the historical facts, but that doesn't matter. If you want to see what
really happened, then go watch some documentary about it on the Discovery
channel. This is not a historical movie, and the director is allowed to
let
things happen differently than they really could have happened.

This movie is an 8 at least, and one of the best movies of all time. It's
not in the IMDB top 250, which is quite sad. It has great acting, great
effects, and is really enjoyable to watch. Unfortunately, people love to
comment negatively about something good, because they are unable to think
for themselves and have a need to be accepted in their 'clique'. I love
this
movie, and am not afraid to admit it. 10/10