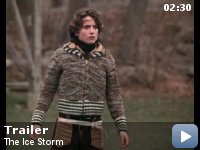 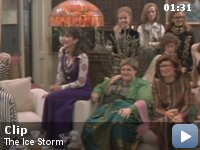 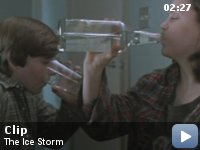 Storyline
In the weekend after thanksgiving 1973 the Hoods are skidding out of control. Benjamin Hood reels from drink to drink, trying not to think about his trouble at the office. His wife, Elena, is reading self help books and losing patience with her husband's lies. Their son, Paul, home for the holidays, escapes to the city to pursue an alluring rich girl from his prep school. And young, budding nymphomaniac, Wendy Hood roams the neighborhood, innocently exploring liquor cabinets and lingerie drawers of her friends' parents, looking for something new. Then an ice storm hits, the worst in a century. Things get bad…

Taglines:
The American Dream was over. But the hangover was just beginning.

To prepare for the film, Ang Lee let the cast members study stacks of magazine cutouts from the early 1970s.

Paul Hood:
[narration]
In issue 141 of the Fantastic Four, published in November, 1973, Reed Richards had to use his anti-matter weapon on his own son, who Aannihilus has turn into the Human Atom Bomb. It was a typical predicament for the Fantastic Four, because they weren't like other superheroes…

I went to see this film with one of my friends, in a cinema I had never been
to before. It was one of those rare and delightful experiences where you are
the only people in the theatre. No one around to distract you. No kids
munching on crisps, or couples quietly muttering sweet nothings, or idiots
trying to tell the characters what to do. It was great.

The film was just brilliant. It really nearly broke my heart. Every
performance is perfect. The direction by Ang Lee is deliberate and painful
as he slices into you with the lives of those he makes you watch. It looks
amazing, in a beautifully bleak way. It is also one the most compelling and
painful movies that I have ever come across. The family life portrayed is
messed up and all the relationships that are displayed are disfunctional on
some level or other. But still I was forced to care for them – all of them.
Such is the brilliance of the acting and the script writing.

I own this film, but I can't watch it alot. Once a year is just enough. It's
to traumatic and beautiful to watch more than that.