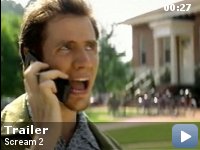 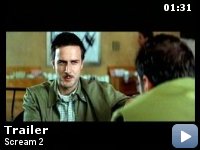 Two years after the events of the first film, a new psychopath dons the "Ghost face" costume and a new string of murders begin.

Storyline
It has been two years since the tragic events at Woodsboro. Sidney Prescott and Randy Meeks are trying to get on with their lives, and are currently both students at Windsor College. Cotton Weary is out of prison, and is trying to cash in on his unfortunate incarceration. Gale Weathers has written a bestseller, "The Woodsboro Murders," which has been turned into the film, "Stab," starring Tori Spelling as Sidney. As the film's play date approaches, the cycle of death begins anew. Dewey Riley immediately flies out of Woodsboro to try to protect Sidney, his "surrogate sister." But in this sequel to the 1996 horror film, the number of suspects only goes down as the body count slowly goes up!

Usually when making a motion picture when an actor is heard on screen, but not seen, such as a voice on a telephone, the actor records his part during post production, which takes place after the completion of principal photography. However, Wes Craven had Roger Jackson, The Voice, on set and actually speaking to on-screen actors by practical, not merely prop, telephone in order to create reality and fear for them. Jackson said when he was on set he was kept out of sight of other actors so they could not put a friendly face to The Voice. Jackson said also that while observing on-set action on monitors, he could see Heather Graham appeared scared between takes, whereas Sarah Michelle Gellar would converse with him on the telephone.

Errors made by characters (possibly deliberate errors by the filmmakers):
In the beginning when Maureen Evans goes to the concession stand, she orders a small Pepsi. However, when she turns around, her drink is anything but small.

Gale:
Look, local woman! I know you hold me up as your career template and that it gives you some sort of charge to challenge me, but give it a rest.


In addition to becoming the first major box office hit for Dimension
Films, 1996's SCREAM also became the horror film that would set the
tone for the other horror films of the late 1990s. It was a phenomenal
achievement in the horror genre so of coarse a sequel was just around
the corner. The most common rule with movies is that sequels are
terrible and while that is normally always true, that isn't the case
with SCREAM 2. It should be noted that SCREAM 2 came out just a year
after the original SCREAM. Most often when sequels come out a year
after their predecessor, they turn out to be pretty bad (CHILD'S PLAY 3
for example). SCREAM 2, while not as good as SCREAM, manages to be an
effective and well made sequel that surprisingly is just as clever as
the first one and it contains the same kind of great dialogue the first
one had as well. It helps that SCREAM 2 has most of the same cast
members as the first one too. I think it's safe to say that SCREAM 2
was one of the better sequels of the 1990s. I'm giving it 7/10.
Recommended for fans of horror.