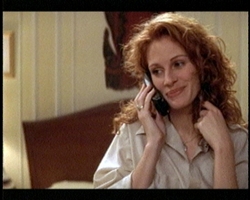 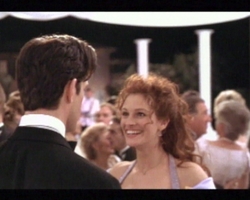 When a woman's long-time friend says he's engaged, she realizes she loves him herself… and sets out to get him, with only days before the wedding.

Storyline
A woman who, by a promise made years earlier, is supposed to marry her best friend in three weeks, even though she doesn't want to. When she finds out that he's marrying someone else, she becomes jealous and tries to break off the wedding.

Taglines:
It's about finding the love of your life. And deciding what to do about it.

The scene where everyone gathers in a large room to watch Kimmy throw the bouquet was filmed at Cuneo Museum and Gardens in Vernon Hills, Illinois. The movie crew removed the large carpet from the floor and stored it someplace – it took the museum staff several months to find it again.

Errors in geography:
After Michael and Kim pick up Julianne from O'Hare Airport, they're heading north on Chicago's Lake Shore Drive. Kimmy swerves wildly to her exit. The next time you see the car, it's heading south on Lake Shore Drive with the Drake Hotel in the distance.

George Downes:
The misery, the exquisite tragedy. The Susan Hayward of it all. I can just picture you there, sitting alone at your table in your lavender gown.

Julianne Potter:
Did I tell you my gown was lavender?

George Downes:
Hair swept up. Haven't touched your cake. Probably drumming your fingernails on the white linen tablecloth, the way you do when you're really feeling down. Perhaps looking at those nails thinking: 'God, I should have stopped in all my evil plotting to have that manicure, but it's too late now.

Julianne Potter:
George, I didn't tell you my dress was lavender.
[…]

For a while, I was getting concerned about the direction Julia Roberts'
career was taking, after misfiring in such dismal duds as "Mary Reilly" and
"Michael Collins" where she seemed so shell-shocked that her radiant smile
was nowhere in sight.

Thank God she rebounded for "My Best Friend's Wedding". This film, while
not perfect, is a shining example of what makes Julia so radiant and
desirable in the right role. And she sure gets it here.

As Julianne Potter, Julia gives the same sweet, radiant glow she offered us
in "Pretty Woman". Seems she's fallen in love with her best friend for ages
Michael O'Neal (Dermot Mulroney) – unfortunately, it's on the eve of his
wedding to an effervescent, perky girl (Cameron Diaz) who does her darndest
to make Julianne her best friend…as well as her maid-of-honor. Of course,
Julianne does what any right-thinking young lady would do: everything in her
power to break up the wedding of the title.

This is not as melodramatic as it sounds: this is, in fact, one of the
brightest, smartest and all-around funniest comedies of the decade. All the
lead characters make the absolute most of their parts and revel in the glory
of love, double-dealing and flat-out lying. Along with being extremely
romantic, this has to be the most cleverly-plotted love story ever: for
every plot thought up by Julianne, there's a twist or foul-up that has
everything to do with true love and/or blind devotion.

There are great faces in the background, too. Susan Sullivan, Philip Bosco,
the great M. Emmet Walsh all lend able support and offer their own fine
support. But how can I mention them in the same paragraph without adding
Rupert Everett into the fray? As Julianne's gay editor/friend, he adds
great color to all his scenes, especially at the dinner with the wedding
party at the seafood restaurant (you've seen it, you know what I
mean).

I won't spoil anything by saying that true love wins out in the end; face
it, would you WANT to see Julia Roberts as a BAD GUY? Maybe you would, but
not in a romantic comedy. In fact, the main surprises lie in the twists and
turns that lie throughout this film. Every twist makes the story all the
more interesting and (incidentally) funny. Of course, the music makes the
proceedings all the better (with a heavy assist from Dionne Warwick on two
occasions).

So to recap, what else can I say: if you love Julia Roberts, love stories,
comedies and weddings, here's your movie.

Ten stars and a copy of "Dionne Warwick's Greatest Hits" on CD for "My Best
Friend's Wedding", where true love wins but true friendship comes in a close
second.

Keep up the good work, Julia.