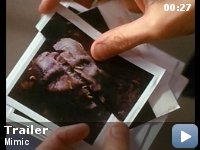 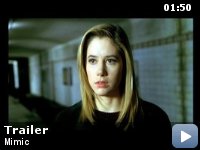 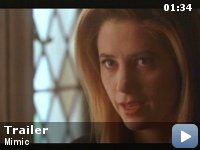 Three years ago entomologist Dr. Susan Tyler genetically created an insect to kill cockroaches carrying a virulent disease, now the insects are out to destroy their only predator, mankind!

Storyline
A disease carried by common cockroaches is killing Manhattan children. In an effort to stop the epidemic an entomologist, Susan Tyler, creates a mutant breed of insect that secretes a fluid to kill the roaches. This mutant breed was engineered to die after one generation, but three years later Susan finds out that the species has survived and evolved into a large, gruesome monster that can mimic human form.

Factual errors:
In the last scene where the male bug is struck by the train, you see it struggling to hold onto the front of the train for a while. It manages to hang in there for a little while before being pulled under and splattered everywhere. But when Dr Susan looks around the corner, after the bug is killed, she sees parts of the bug just meters away from where she was hiding. The bug should be further down the tracks, because it was dragged for ages before going under.

Susan Tyler:
Sometimes an insect will even mimic its predator.

So that's what those mystery stains are in the subway!


After a devastating disease traced back to New York City's cockroach
population is eliminated by using a genetically engineered superbug
that wiped out the roach population, it seems that everyone–especially
the previously affected kids–is in the clear. That is, until one of
the superbugs–which were supposed to be infertile and have a short
lifespan–shows up in the subway system years later, larger and nastier
than ever.


Take 1950s "nature run amok" horror/sci-fi, combine it with Alien
(1979), add in the production design sensibilities found in Alien 3
(1992), set it in the "modern day" New York City subway system, and
you've got Mimic. That may sound too derivative for some tastes, but I
neither give points for originality nor subtract them for a lack of
originality. All that matters to me is that a film works on its own
terms, and Mimic, despite a couple small flaws, is very effective.

Those couple small flaws include that you have to pay a lot of
attention during the beginning if you want to catch all of the
backstory–it moves by very quickly, with pertinent information
frequently mumbled or given in the background, and some of the attack
scenes are a bit too dark and cut to simulate a whirling dervish.

The biggest asset is the production design. Mimic has a delicious
horror atmosphere that you could cut with a knife. Of course it's easy
to achieve cringe-worthy moments when the screen is filled with bugs
and characters are crawling down (and in some cases living in) dingy
subway tunnels, but almost every shot in the film has a similar effect.
Gloom, decay and disturbing, unidentifiable biological masses are the
visual themes. The creature designs are fantastic, with the "mimicking"
design being the most impressive.

Of course, the plot is somewhat predictable, and the "don't tamper with
nature" subtext is as conspicuous here as it was in Frankenstein
(1931), but predictability isn't a flaw here, and Frankenstein was a
masterpiece. Mimic has an absorbing story, with likable characters and
suspense to spare.