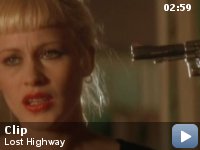 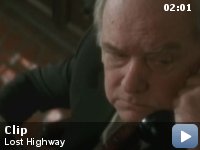 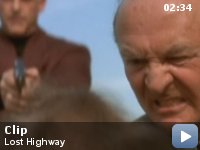 After a bizarre encounter at a party, a jazz saxophonist is framed for the murder of his wife and sent to prison, where he inexplicably morphs into a young mechanic and begins leading a new life.

Storyline
Fred Madison, a saxophonist, is accused under mysterious circumstances of murdering his wife Renee. On death row, he inexplicably morphs into a young man named Pete Dayton, leading a completely different life. When Pete is released, his and Fred's paths begin to cross in a surreal, suspenseful web of intrigue, orchestrated by a shady gangster boss named Dick Laurent.

As of 2010, this is Robert Blake's last film appearance.

Arnie:
Pete! Where've you been? It's really good you're back! A lot of people are gonna be glad you're back, including me!

Pete Dayton:
Well, it's nice to be back, Arnie.

Arnie:
Mrs. Smith is waiting for you.

Pete Dayton:
Sure, I'll get right to her.

Arnie:
And Mr. Eddy called every day asking about you. Can I call him and tell him you're back?

Pete Dayton:
Sure, call him. Tell him to come on in. I'm back and I'm ready to work.

Arnie:
You're ready to work?

Arnie:
[to the other garage employees]
Pete is back!

For those, who try to understand the Movie

First of all let me say, that it is not as serious, if you don't get
the movies of David Lynch at once (or even never). Lynch is not a film
maker who tries to make movies with a problem-solving message, but an
artist. Moreover he started as a painter and so he tries to create an
atmosphere more than to develop a story.

Most viewers will have realized that "Lost Highway" is a story about a
schizophrenic murderer (even Lynch mentioned it). But that is not the
complete clue to the movie. Cause everyone is aware of Fred's
metamorphosis (although no one seems to really care about). So his
mutation seems to be real and till the end no one proves the opposite!
But "Lost Highway" is not a common movie about schizophrenia like
"Beautiful Mind" or "Das weiße Rauschen" (Which is a must-see, too!).
INSANITY IS NOT THE SUBJECT, BUT THE NARRATIVE PRINCIPLE OF THE MOVIE!
In other words: The movie is not a presentation of mental sickness, but
a complete sick presentation, which means that the subjective
perception of the protagonist becomes the objective reality! You'll
find this way of telling a story quite often in surrealistic literature
(i.e Franz Kafka's "Die Verwandlung" engl.: "Metamorphosis" – just note
the title!!).

All Lynch-Movies refer to mental illness or the state of dreaming: No
character ever seems to care about the illogical and irrational twists
of the plot(just like in dreams), the landscapes are unrealistic and
change appearance or size and the story takes place at deserted areas
(forests, claustrophobic rooms, industrial areas, desserts) far away
from civilization or reality!

Insanity – Sanity/ Evil – Good/ Reality – Fiction are no longer
categories one can rely on. The protagonists see their surroundings and
environment always threatening, but they never question it! They act
with such a matter of course, that one has to ask whether it is
ignorance, naiveté or self-deception. Perhaps you don't have to ask
yourself how far you are able to UNDERSTAND the message. Perhaps you
have to ask yourself how far you are willing to ACCEPT the message. Be
aware, that once you started seeing the world at a different way you
will follow that white rabbit right the way in his burrow…