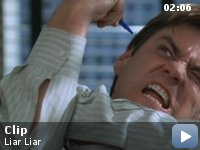 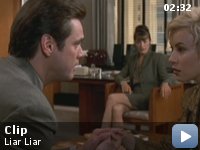 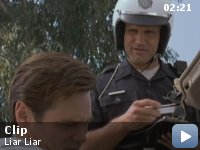 A fast track lawyer can't lie for 24 hours due to his son's birthday wish after the lawyer turns his son down for the last time.

Storyline
Fletcher Reede, a fast talking attorney, habitual liar, and divorced father is an incredibly successful lawyer who has built his career by lying. He has a habit of giving precedence to his job and always breaking promises to be with his favorite young son Max, but Fletcher lets Max down once too often, for missing his own son's birthday party. But until then at 8:15 Max has decided to make an honest man out of him as he wishes for one whole day his dad couldn't tell a lie. When the wish comes true all Fletcher can do is tell the truth and cannot tell one lie. Uh-oh for Fletcher!

The 18 April 1996 draft of the screenplay credits Mike Binder as a writer.

Factual errors:
The airport's callsign should be "Los Angeles Tower" or "Los Angeles Ground" instead of "Control 84". As for the airline, Tower Air, its radio callsign in real life is "Tee Air", and not "Tower".

Greta:
[in an annoyed tone]
You told me you bought this picture frame at Tiffany's. Tiffany's?


Jim Carrey puts so much energy and pure comedic brilliance into this
movie that we hardly noticed how corny and hackneyed was the plot or
how wearily didactic was the moral lesson for all fathers who neglect
their children for the goddess of success. And really we didn't care.
What we loved almost as much as Carrey's rubber mouth and oral blockage
(like an overheated boiler fighting not to explode) was the premise: a
lawyer that can't lie. Now there's an oxymoron! As Carrey tries to
explain to his son Max, lawyers need to lie. Actually he says grownups
need to lie, which is a truth that we really do not need to exam too
closely here. To laugh at something deeply troubling in our nature is a
way of dealing with it.


So the genius of this movie is first the talent of Jim Carrey, but
second, for kids who come to the realization of adult mendacity for the
first time, it is the discovery of comedy as a way to cope. Why do
adults need to lie? is a question that a kid can never figure out, and
then by the time he is an adult himself (or actually a teenager), he
can no longer comprehend how important the question once was. Call it
innocence lost, or the socialization process.

My favorite part of the movie is the courtroom scene with Jennifer
Tilly dressed oh so sluttily and her adulterous beaux looking like a
model for the cover of a romance novel and Carrey in tatters in his
$900 suit. Second would be the bathroom scene in which Carrey tries to
tear himself apart (and seems to almost succeed). His flapping mouth
between the toilet seat and the bowl was inspired. Give some credit to
director Tom Shadyac, who managed to steer the vehicle with Carrey at
the controls, and to writers, Paul Guay and Stephen Mazur, who wrote
some funny lines.

The great comedians totally let themselves go. They are totally on.
They go to extremes and beyond. It's like transcending not just the
ordinary, but even the imagined. See this obviously for Jim Carrey, one
of the great comedic talents of our time, an original who would have
delighted Charlie Chaplin with his extraordinary muggings, his blatant
audacity and his suburb timing.

TagsUSA
Bullet
The Devil's Own