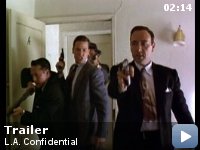 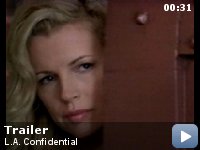 A shooting at an all night diner is investigated by three LA policemen in their own unique ways.

Storyline
1950's Los Angeles is the seedy backdrop for this intricate noir-ish tale of police corruption and Hollywood sleaze. Three very different cops are all after the truth, each in their own style: Ed Exley, the golden boy of the police force, willing to do almost anything to get ahead, except sell out; Bud White, ready to break the rules to seek justice, but barely able to keep his raging violence under control; and Jack Vincennes, always looking for celebrity and a quick buck until his conscience drives him to join Exley and White down the one-way path to find the truth behind the dark world of L.A. crime.

Taglines:
Everything is suspect…everyone is for sale…and nothing is what it seems.

Incorrectly regarded as goofs:
When Ed Exley asks Lynn Bracken what she can tell him about Dudley Smith, she says she has never heard of him. While unlikely to be true, she was quite possibly lying.

Sid Hudgens:
[voiceover]
Come to Los Angeles! The sun shines bright, the beaches are wide and inviting, and the orange groves stretch as far as the eye can see. There are jobs aplenty, and land is cheap. Every working man can have his own house, and inside every house, a happy, all-American family. You can have all this, and who knows… you could even be discovered, become a movie star… or at least see one. Life is good in Los Angeles… it's paradise on Earth." Ha ha ha ha. That's what they tell you, anyway.

Everything in this film is fantastic.

L.A. Confidential is, without a doubt, the best film of the 1990s, and
quite
possibly one of the best films ever made.

As with any great film, it all starts with the writing. The story is
riveting, the dialogue is smart and quite funny, and the characters are
written in three dimensions.

The acting is phenomenal. Perhaps a bigger tragedy than L.A.
Confidential's
loss to Titanic in the Best Picture race is that none of the three lead
actors even garnered nominations. Russell Crowe, Guy Pearce, and Kevin
Spacey are absolutely phenomenal; it is their characters that drive this
fascinating story about police corruption in 1950s Los Angeles. We get to
know these people, to understand who they are and why they do what they do,
and to root for them to overcome their imperfections.

The directing is fantastic. Curtis Hanson doesn't shove anything in the
audience's face; instead, he allows the audience to discover the film's
nuances on their own. (That makes this an excellent film for repeat
viewings, you truly catch something new every time). 1950s Los Angeles is
reproduced beautifully. The editing is quick and seamless, the music is
perfect for the film (Hanson should teach other directors how to do a
montage effectively), and the cinematography is great.

I can't find a negative thing to say about this film. It's truly a
masterpiece.

TagsLA USA
The Game
The Edge