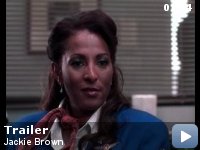 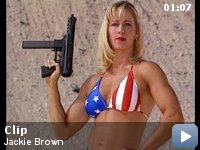 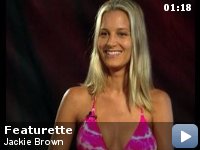 A female flight attendant becomes a key figure in a plot between the police and an arms dealer.

Storyline
Jackie Brown is the name of a flight attendant who gets caught smuggling her boss' gun money on the airline she works for. Luckily for her, the Fed Ray Nicolet and the LA Cop Mark Dargus decide to team up in order to arrest the arms dealer she works for, whose name they don't even know. Here's when she has to choose one way: tell Nicolet and Dargus about Ordell Robbie (the arms dealer) and get her freedom -except that if Ordell suspects you're talking about him, you're dead- or keep her mouth shut and do some time. That's when she meets Max Cherry -her bail bondsman-, a late fifties, recently separated, burnt-out man, who falls in love with her. Then Jackie comes up with a plan to play the Feds off against Ordell and the guys he works with -Louis Gara and Melanie Ralston, among others- and walk off with their money. But she needs Max's help. No one is going to stand in the way of his million dollar payoff…

Taglines:
LOOK OUT! caught between the Feds and a cold blooded killer. With half a million dollars up for grabs. No one knows how it's going down. Except for maybe JACKIE BROWN

Anachronisms:
Ordell's cellular phone (Motorola StarTac) was not available until 1997.

Tarantino's sleeper. An underrated gem of a movie.

Many people were disappointed with 'Jackie Brown' when it was first released
as it didn't live up to their expectations created by the more flamboyant
'Reservoir Dogs' and 'Pulp Fiction'. I admit that I was one of those
disappointed fans. But as the years have gone by I have come to appreciate
this movie more and more, and if you deal with what it IS and not what you
thought it was going to be, you'll see that it is an underrated gem of a
movie. 'Jackie Brown' is much more character driven and leisurely plotted
than Tarantino's previous two movies. I haven't read the Elmore Leonard
novel on which it was based so I can't tell whether this was a conscious
decision by Tarantino himself, or it's because of the source material, but
it might be a stumbling block for those with MTV-style attention spans.
1970s crime movie buffs will find it much easier going. The big names in the
cast like De Niro, Jackson and Fonda are all very good, but the real
standout performances in this movie are by 70s blaxploitation icon Pam Grier
('Coffy', 'Foxy Brown', 'Black Mama White Mama',etc.etc.) and a revelatory
one from Robert Forster. Forster back in the day showed plenty of promise in
movies like 'Medium Cool' but quickly found himself stuck in b-grade
exploitation movies like 'Vigilante' and 'Alligator'. Fun stuff, but hardly
Oscar material. Max Cherry is the best role he has ever been given, and he
is superb in it. The fascinating thing about 'Jackie Brown' for me is that
Tarantino's critics accuse him of making shallow and violent
self-consciously hip crime films, but the central story of this movie
concerns an inter-racial Middle Aged romance, something I haven't seen done
in a believable or realistic fashion by Hollywood before. By doing this so
well Tarantino shows he has much more depth, and is a much more interesting
and braver film maker than his more acclaimed contemporaries. 'Jackie Brown'
is a fine movie that hopefully one day will get the kudos it deserves. Don't
overlook this one just because it isn't 'Pulp Fiction The Next
Generation'!

TagsUSA
Open Your Eyes
The Boxer