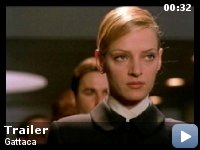 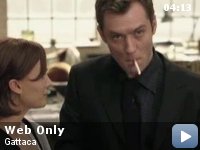 A genetically inferior man assumes the identity of a superior one in order to pursue his lifelong dream of space travel.

Storyline
In the not-too-distant future, a less-than-perfect man wants to travel to the stars. Society has categorized Vincent Freeman as less than suitable given his genetic make-up and he has become one of the underclass of humans that are only useful for menial jobs. To move ahead, he assumes the identity of Jerome Morrow, a perfect genetic specimen who is a paraplegic as a result of a car accident. With professional advice, Vincent learns to deceive DNA and urine sample testing. Just when he is finally scheduled for a space mission, his program director is killed and the police begin an investigation, jeopardizing his secret.

Taglines:
Only one criterion : genetic perfection

While it has been identified that "GATTACA" uses the 4 DNA nucleotide abbreviations of G,A,T,C, more specifically, when identifying genetic markers, the tests measure "short tandem repeats" at specific DNA marker locations. These are known as "GATA or CA" repeats – hence GATTACA.

Director Josef:
You keep your work station so clean, Jerome.

Vincent:
It's next to godliness. Isn't that what they say?

Director Josef:
Godliness. I reviewed your flight plan. Not one error in a million keystrokes. Phenomenal. It's right that someone like you is taking us to Titan.

Vincent:
Has the committee approved the mission? There's been talk of delay.

Director Josef:
You shouldn't listen to talk. You leave in a week. You've got a substance test.

One of the finest movies of the decade.

Gattaca is a brilliant under-rated piece of cinema that the not-too-distant
future will, in retrospect, see it as one of the more outstanding movies of
the nineties. It is prolific, stylish, thought-provoking, and one of the
few recent science fiction movies that totally foregoes special effects and
does it well.

There is nothing about Gattaca that I didn't like. It is a subtle piece of
art that reminds of the writing of Ray Bradbury. Technology (the core
element of science fiction) is only the backdrop for the story of a man who
goes against all odds, including his brother, and overcomes those
odds.

Make sure you watch it more than twice. There are many subtle details that
you'll miss if you don't (ie, Gattaca's doctor asks, "Have I ever told you
about my son?" not even five minutes into the movie, and childhood Vincent
falls down holding a toy rocket…) and it's these small details that create
a tapestry of cinematic artistry.

The soundtrack is phenomenal. The sets are noir and stylistic, and
(thankfully) instead of trying to present a realistic physical future Niccol
instead vies for the FEELING of the future: constrained, restricted, and
patterned.

Watch it before it's cool to have watched it.

TagsDNA USA
I Know What You Did Last Summer
Switchback