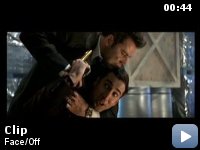 A revolutionary medical technique allows an undercover agent to take the physical appearance of a major criminal and infiltrate his organization.

Storyline
Sean Archer, a very tough, rugged FBI Agent. Who is still grieving for the dead son Michael. Archer believes that his son's killer is his sworn enemy, a very powerful criminal, Castor Troy. One day, Archer has finally cornered Castor, however, their fight has knocked out Troy cold. As Archer finally breathes easy over the capture of his enemy, he finds out that Troy has planted a bomb that will destroy the entire city of Los Angeles and all of its inhabitants. Unfortunately the only other person who knows its location is Castor's brother Pollux, and he refuses to talk. The solution, a special operation doctor that can cut off people's faces, and can place a person's face onto another person. Archer undergoes one of those surgeries to talk to Pollux. However, Castor Troy somehow regains consciousness and now wants revenge on Archer for taking his face. Not only is Troy ruining Archer's mission…

Taglines:
In order to catch him, he must become him.

Continuity:
On the plane at the beginning of the movie, Castor (still Cage) passes his drink to his left hand when the stewardess sits on his lap, however, a second later he's putting a cigarette to his lips with his left hand, and the drink is back in his right.

Castor Troy:
[after saving Archers daughter from help boyfriend raping her]
Do you have protection?

Castor Troy:
[pulls out his switchblade]
No. Protection. Next time, let Carl drop his pants, slip this in his thigh, turn it. That way the wound won't close…

One of the greatest action films ever made


John Woo knows, if anybody, how to make good, stylish action. And
that's exactly what this film is; good, cool, stylish action. The plot
is great; fairly psychological and quite interesting. It has a fast(and
remarkably even) pace, I don't think more than 30 minutes passes at any
point in the movie without a giant action scene. All in all, I'd guess
there are about four or five major shootouts, and two chase scenes
which are each several minutes long(without getting repetitive,
fortunately). The acting is excellent; every single major part is
well-played. John Travolta, Nicolas Cage, Joan Allen, Alessandro
Nivola, Gina Gershon, Dominique Swain… all give great, entirely
believable performances. The best are definitely Travolta and Cage,
though; fantastic, truly stellar performances. The characters are all
well-written and credible, right down to the most minor one. The action
is cool and very stylish, in every single action-scene. The theme of
the film is great; of course, the story is completely unlikely, with
the face-switching and all, but once you get past that, once you
suspend disbelief, you'll most likely enjoy the film thoroughly. The
script is excellent, plenty of action, drama, and thriller parts. Also,
you gotta love the sharp contrast 3/4's into the movie, with the kid
listening to sugary pop-music, while people are shooting intensely at
each other. Great film. I recommend it to any fan of John Woo, Nicholas
Cage, John Travolta and action films. 8/10