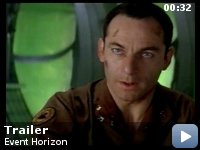 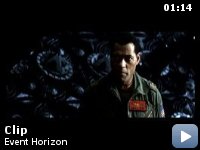 A rescue crew investigates a spaceship that disappeared into a black hole and has now returned…with someone or something new on-board.

Storyline
In the year 2047 a group of astronauts are sent to investigate and salvage the long lost starship "Event Horizon". The ship disappeared mysteriously 7 years before on its maiden voyage and with its return comes even more mystery as the crew of the "Lewis and Clark" discover the real truth behind its disappearance and something even more terrifying.

Revealing mistakes:
All the crew are wearing ID passes. On a spacecraft, millions of miles from anyone else.

Miller:
What are you telling me, that this ship is alive?

Lt. Starck, Executive Officer:
You wanted an answer, and it's the only one I've got.

Miller:
No, what I want lieutenant, is to survive the next 10 hours!

So brilliant its hard to believe Paul Anderson directed AVP.


This is without a doubt one of the greatest horror films ever made! I
wouldn't classify it as sci-fi even though it does pay homage (or some
would say rip-off) to many of the greats, such as Alien and The Black
Hole. This is a pure horror film and also has a b-movie charm. This is
the kind of movie William Castle would be directing if he was still
alive today, but much better! It is the best haunted house movie of the
lot, but its set in a spaceship.


OK, the movie doesn't have the most complicated plot or character
development, it works because of the atmosphere and Paul Anderson has
pulled off a one-trick pony here. The atmosphere in this film is so
friggin brilliant that you forget you're watching a movie and it
physically affects you! James Cameron and Ridley Scott reached this
level of brilliance in the Alien films and David Fincher with Seven.

I've seen this movie over 20 times. It is incredibly entertaining, with
fine performances, amazing special FX, one of the best and creepy music
scores ever, the best space production design ever, the best subwoofer
explosions, the best cinematography, energetic and brilliant
direction…I could go on….

It's also become a bit of a cult classic nowadays. I've loved the film
since it was first released and every friend I show it to agrees and
considers it a sleeper. It is also one of the only films I know that
induces fear into the audience and provokes them to curse in awe. Every
time my mates and I watch it, we are gobsmacked in its craziness! 10/10
– Easily in the top 10 horror films of all time! One of the most
entertaining movies ever made. Paul Anderson has never surpassed this
film and it will be the one he is remembered for.