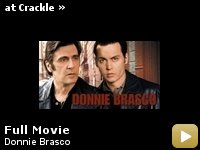 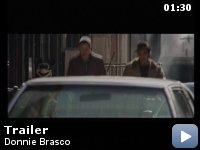 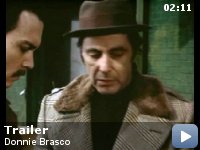 An FBI undercover agent infilitrates the mob and finds himself identifying more with the mafia life to the expense of his regular one.

Storyline
This true story follows FBI agent Joe Pistone as he infiltrates the mafia of New York. Befriending Lefty Ruggiero, Pistone (under the name Donnie Brasco) is able to embed himself in a mafia faction lead by Sonny Black. Ruggiero and Pistone become tight as the group goes about collecting money for 'the bosses'. Eventually, the group become big time when Black himself becomes a boss, all the while Pistone collects evidence. However, the trials and tribulations of the undercover work become more than Pistone can bear. His marriage falls apart and to top it off, the mafia suspect a mole in the organization. The real dilemma is afforded to Pistone, who knows if he walks away from the mafia, Ruggiero will be the one punished.

Taglines:
Donnie Brasco. Based On A True Story.

Errors made by characters (possibly deliberate errors by the filmmakers):
The nickname of Al Pacino's character is "Lefty," which generally indicates that the eponymous person is left-handed. Towards the very end of the film (probably around the time he takes off his jewelry and leaves for the last time), "Lefty" uses his right hand in a way that only a right-handed person would.

Lefty:
How many times have I had you in my house? If you're a rat, then I'm the biggest mutt in the history of the Mafia.


Yes, I am going to make the bold claim that this is his best work. "Are
you talking about the same Al Pacino that did Scarface, Heat, AND the
Godfather movies" you ask. Yes, yes, and let me explain myself. First
of all, I want to add that I LOVE Pacino's work. He has such a
commanding presence on screen and nobody in cinematic history can
scream as well as him (though Gene Hackman is damn good). He can scare
the hell out of you with just one crazed look in his eye and he never
gives a flat performance (well, except in Revolution).


Having said that, I think Pacino is incredible in this flick because
his character is so understated. While his work often consists of
playing flamboyant, over-the-top, and almost cartoonish
figures(especially in Scarface and The Devil's Advocate), this film is
a change of pace for him. Sure, he's still playing a mobster, but he's
not as psychotic as usual, and for once, you get to see the inner
struggles of a crook who deep down has a heart of gold (despite all of
the murders). Pacino is perfect as Lefty, an aging crimical who wants
out of the mob lifestyle, but doesn't know how to do it. Though you see
the fast and fun world of mobsters in flicks like Goodfellas, this film
gives you a sense that the mob life isn't that glamorous.

Along with Pacino's acting, Johnny Depp is delectable as Joe Pistone
(Donnie Brasco) because you can see his inner torment as well. He knows
that he's been assigned to infiltrate the New York mob scene, but he
develops such a close bond with Lefty that it's almost hard to bring
him down. A very real, human relationship permeates between the two
that is very moving. I like how the characters are always joking about
being a "wise guy," as it provides some light chuckles, and it also
shows that in order to live this lifestyle, you've gotta talk tough and
act tough (as if I would know what that's like).

The supporting cast is particularly noteworthy. Bruno Kirby plays a
great weasel, Anne Heche is wonderful as Pistone's neurotic wife (you
can understand her suffering, what with being married to an FBI special
agent) and Michael Madsen is reliable, once again, as a mobster
(honestly, does this guy do anything besides gangster or sci-fi
flicks?). Every time I watch this movie I am breathless afterwards. The
acting is wonderful, the music is superb, and frankly, I can't believe
this stuff actually happened. Then again, I haven't read the book, so I
don't know how much of it is true.

Overall, this movie gets 10 out of 10. I'm shocked it doesn't get more
recognition, especially with such prolific actors as Pacino and Depp
leading the way. This is a different kind of mob movie, as it shows a
more somber side to this way of life, and I recommend it unequivocally.