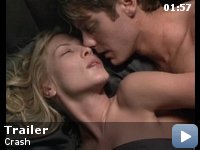 After getting into a serious car accident, a TV director discovers an underground sub-culture of scarred, omnisexual car-crash victims who use car accidents and the raw sexual energy they produce to try to rejuvenate his sex life with his wife.

Storyline
Since a road accident left him with serious facial and bodily scarring, a former TV scientist has become obsessed by the marriage of motor-car technology with what he sees as the raw sexuality of car-crash victims. The scientist, along with a crash victim he has recently befriended, sets about performing a series of sexual acts in a variety of motor vehicles, either with other crash victims or with prostitutes whom they contort into the shape of trapped corpses. Ultimately, the scientist craves a suicidal union of blood, semen, and engine coolant, a union with which he becomes dangerously obsessed.

Taglines:
Life is a highway

Holly Hunter got a part in the film because she had been lobbying David Cronenberg for the opportunity to work with him for years.

An anti-erotic exploration of the hollowness of modern life

Even in the midst of frenzied lovemaking, the characters remain distant,
their voices quiet and abstracted, their gazes directed inward. These are
people who have been told all their lives by their culture, by TV and
movies, that sex is, on the one hand, the most perfect form of communion
and
connection with another human being; and, on the other hand, that it is the
ultimate in transcendent and transformative experiences. Instead, they
discover to their horror that even during sex they still feel nothing.
They
crave connection, they are starved for a glimpse of transcendence, but no
matter what they do, no matter who they do it with or how often, while
their
bodies may feel passion, their minds and hearts remain cold and empty.

In the more recent movie Pleasantville, the Jennifer/Mary Sue character is
unable to feel anything either, and remains stubbornly black and white no
matter how much sex she has, until her brother suggests that "maybe it
isn't
the sex" that is the key to moving from black and white to color, from
passionlessness to feeling. Unfortunately, in Crash, there is no one to
suggest to David and Catherine Ballard that maybe it isn't through sex that
they will find the transformation and connection they are craving. So they
instead seek more and more extreme forms of sexual stimulation, only to be
disappointed again and again.

James is hurt in a car crash, and during his stay in the hospital he meets
Helen (who was in the other car) and later Vaughan, a man who like James
and
Catherine is in desperate search of feeling, only he looks for it in the
violence of car crashes. With Helen, at first James, then Catherine too is
drawn into Vaughan's world, where sex and death (eros and thanatos for you
Freudians) meet in the twisted metal of wrecked cars and the mutilated
bodies of the victims of fatal car crashes and the survivors of near-fatal
ones.

But not even the horror of mutilation or the adrenaline rush of near-death
experience can lend James and Catherine's desperate coupling the depth of
feeling that they so desperately crave.

Like all the people who buy expensive automobiles to give them a feeling of
power and independence, only to discover that no matter how snazzy their
car
is, they still feel powerless and unhappy, James and Catherine have bought
into one of our culture's Big Lies, that sex is the answer. This film
shows
us that it is not.

TagsCanada TV
Bullet
The Devil's Own