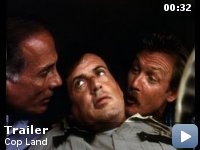 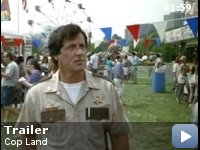 The sheriff of a suburban New Jersey community populated by New York City policemen slowly discovers the town is a front for mob connections and corruption.

Storyline
Sometime in the 1970's, police officers from New York wanted a safe haven to live, away from the dangers of the streets of New York, this is when they established a "Cop Land" in the small New Jersey town of Garrison. Freddy Heflin who was always admired by the New York cops wanted to become one, but because he was deaf in one ear this prevents him from achieving his goal, but has become sheriff of Garrison. Recently there have been a dark omen surrounding the NYPD, and Freddy is now investigating on this case, then Internal Affairs officer Mo Tilden is also on the case and asks Freddy for help, but Freddy could not. Now Freddy suspects that a New York cop named Ray Donlan might be one of the many cops who is corrupted by the mob and other criminals. Now, Freddy must find a cop who is nicknamed "Superboy" who can testify against Donlan and protect him, before Donlan finds Superboy and kills him.

Taglines:
No One Is Above The Law.

Many of the cast subsequently appeared in
The Sopranos which is also set in New Jersey.

Errors made by characters (possibly deliberate errors by the filmmakers):
Early in the film, a black activist named Cyril Johns is seen on a TV and says "A drunk cop jumps off a bridge. That does not erase the murder of two black children." This is obviously a reference to Super Boy having the accident on the bridge and then supposedly jumping afterwards. However, there is nothing to really indicate that Super Boy was in fact drunk during that incident. He did come out of a bar before anything happened, but he is clearly not drunk when he does so.

Moe Tilden:
[narrating]
Every precinct has its cop bar – a private club – all blue. For the 3-7 it was the Four Aces, just across the river.

Stallone's comeback not for the ignorants

I know that everyboby's laughing about a movie that Stallone's starring in.
His name is an easy target even to the most ignorant ones; they immediately
put him under the 'action movie' label, like Arnold or Jean-Claude. What
people forget (or don't know) about is that Stallone differs from all those
action movie actors, in that he turned into this icon we all know by making
a series of (really) bad choices. Do you know that Sly's the one who wrote
the script of the Oscar winning Rocky? Do you know that because his face is
half paralyzed (from birth) he speaks in that weird way that some people
find difficult to understand what he's saying (and always joke about it)?
Do
you know that he was paid only $60.000 for his acting in Cop Land, while he
had to gain 30 pounds for his role?


To me Cop land is the kind of movie Stallone should have made after First
Blood. The director knows what Sly's really capable of so he gives him this
role of the cop that is so fair and just, but inside him a burning past
lives on. He's a hero and because of that he's lost half of his hearing to
save the woman he loves, but she went on to marry another man. He can't be
promoted because of his hearing, and while he wants to stay integral, he
has
to face the deeds of his fellow police officers.

The movie showcases the struggle of a man to overcome his past, the
temptation of corruption and the triumph of one's will to remain true to
what he believes in. The final sequence is similar to the one's of The
Unforgiven or Taxi Driver and it provides a hymn to the human spirit.
Stallone's perfomance is unforgettable and he should be nominated for an
academy award. Do you think that it's an accident that his performance
overshadows De Niro's and Keitel's appearences?

I believe that if Stallone did a movie like that right after his first 2
triumphs he could be leading a career similar to the one of De Niro's. But
unfortunately, to all of us Sly's only capable of throwing hand grenades.
Right Leonard Maltin?