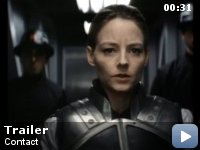 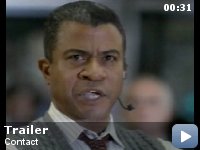 Storyline
Astronomer Dr. Ellie Arroway has long been interested in contact to faraway lands, a love fostered in her childhood by her father, Ted Arroway, who passed away when she was nine years old leaving her then orphaned. Her current work in monitoring for extraterrestrial life is based on that love and is in part an homage to her father. Ever since funding from the National Science Foundation (NSF) was pulled on her work, which is referred to some, including her NSF superior David Drumlin, as more science fiction than science, Ellie, with a few of her rogue scientist colleagues, have looked for funding from where ever they could get it to continue their work. When Ellie and her colleagues hear chatter originating from the vicinity of the star Vega, Ellie feels vindicated. But that vindication is short lived when others, including politicians, the military, religious leaders and other scientists such as Drumlin…

Taglines:
Get ready to take a chance on something that just might end up being the most profoundly impactful moment for humanity, for the history… of history.

Francis Ford Coppola filed breach-of-contract suits against Carl Sagan's estate and Warner Brothers, halting the film. He claimed that Sagan had developed the "Contact" premise for Zoetrope Studios (possibly for a Children's Television Workshop program). The suit alleged that Sagan had not paid the required $250,000 when he had turned the concept into a novel, and in any event was prohibited from selling the film rights to the story.

Errors in geography:
As Ellie steps down the stairs of the U.S. Capitol after testifying, the limousines drive away on a road that is on the west side of the U.S. Capitol. In fact, there is no road there at all, only steps that lead down to a small reflecting pool. This road was added via CGI.

Reading other peoples' reviews, I see a split 50/50 argument where one side
loves the movie and the other hates it. I am not one bit surprised, due to
the importance of the film, and I feel this is proof that Contact is one of
the most powerful movies of the decade. Like the reaction from the civilians
to the machine, a movie with this much heavy firepower is likely to get both
loathing and praise from its viewers. I for one praise the film, for its
toughness and sensitivity, symbolism and passion, and the fact that it is a
rare science fiction film, a gem which was released in a time where
scientific intelligence in film has become a nothing short of a joke as the
wonder of the universe has been ignored and the mystery of alien life have
become a neverending trail of movie villains.


The film of course centers around the science vs. religion theme, the oldest
and most frightening of all school debates. Instead of taking the more
independent path the book takes, the film takes the more sensitive on the
science vs. religion argument throughout the film by telling us that science
and religion points to the same direction (the "pursuit of truth") but are
misunderstood when studying the nature of their WAY of finding the truth
(science uses evidence and answers, religion uses love faith). At the end of
it all, the film lets us know that if science and religion stops colliding
with each other and starts to combine and compliment each other (listen to
Ellie's final words in her testament) the human race might achieve things we
can only dream about now.

A perfectly refreshing film, with lots to say, great acting and directing,
sound and special effects. Robbed by the Academy.

TagsNSF
Men in Black
George of the Jungle