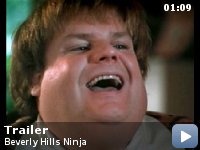 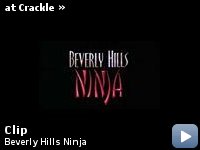 An unlikely man raised by ninjas, goes against a counterfeiter with the help of the criminal's girlfriend.

Storyline
Following a ship wreck, a baby is rescued by a clan of Ninja warriors and raised by them as one of their own. But Haru, as he is called, never quite fits in, nor does he manage to make a worthy Ninja. However, the good-natured and persevering Haru, in his own bumbling way, and with some help from Gobei, manages to prove himself to be a winner in the end.

The title role was originally written for Dana Carvey.

Continuity:
When Haru is about to finish of Tanley during the end, the pipe that Tanley has switches from Tanley's hand in one shot, Haru's in the next shot.

Sensei:
Twenty five years ago, an ancient legend of this sacred art came alive. It spoke of a foreign child who would come among us and become a Ninja master unlike any other. How he arrived on our shores will forever remain a mystery. We Ninjas thought that this child would be the great white Ninja of the legend. We were wrong. We were very wrong.

Enter The Moron (this is a good review)

It's hard for me to review this movie without prejudice because to me,
Chris
Farley is the funniest person I have ever seen. Even though my adoration
of
the late comedian precludes me from giving a impartial rating of this
movie,
I can at least admit that this isn't one of his best efforts (I still
loved
this movie, it's just not my favourite Farley flick). Nevertheless, I'm
going to take the easy way out and say: Come on, take it for what it is, a
Chris Farley movie.


Farley plays Haru, an orphan adopted at birth by a clan of ninjas. He is
raised under the pretenses that he is the Great White Ninja. Needless to
say, his development is much anticipated by his teachers . Unfortunately,
to the dismay of everyone, he grows up to be overweight and klutzy.
While
the ninja graduates are out celebrating, Haru finds himself alone at the
retreat when a mysterious woman (Nicollette Sheridan) enters looking for
help. Believing Haru to be a ninja, she hires him to spy on her
boyfriend,
an assignment he accepts with great enthusiasm. Hot on the boyfriend's
trail, Haru witnesses a murder and eventually ends up in Beverly Hills.
Surviving on dumb luck and a designated guardian ninja, Haru never gives
up
on his task.

Like I said before, this isn't Farley's greatest contribution to his
comedic
resume. But make no mistake, this is a funny movie. Farley's bread and
butter is his propensity to bumble and stumble in any given situation –
walking into poles, falling down stairs, crushing coffee tables, etc.
Since
his character is expected to be agile and sleek, the comedy in "Beverly
Hills Ninja" is that much funnier. The exact same formula worked for
Farley's SNL character Barney, the Chippendale's hopeful.

Many critics felt that, by this time, Farley was a one-trick-pony whose
act
had nothing more to offer than jokes involving head and groin injuries.
Perhaps his choice in films were poor but to don't deny him the
recognition
of his talent is unfair. Watch the movie and you'll see Farley display all
the qualities of a great comedian: intelligence, timing, pathos. He was a
tremendous talent and I will miss him very much.

TagsUSA
Evita
In Love and War