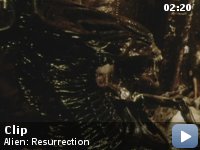 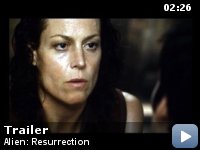 200 years after her death, Ellen Ripley is revived as a powerful human/Alien hybrid clone who must continue her war against the Aliens.

Storyline
200 years after the conclusion of Alien 3, the company is able to resurrect Ripley through the process of cloning and the scientists successfully take the Queen Alien out of her. But, Ripley's DNA gets mixed up with the Queen's and she begins to develop certain alien characteristics. The scientists begin breeding the aliens, but they later escape. Soon the Xeno-morphs are running amok on the ship, which is on course to earth. The Queen then gives birth to a deadly new breed of alien, which could spell disaster for the entire human race. It's up to Ripley and a band of space pirates to stop the ship before it reaches earth.

Joss Whedon has commented on his dissatisfaction with the movie. Fans had speculated that the finished article deviated from his original script in some fatal manner, however he put such rumors to rest. His dialogue, action and plot were essentially intact. However he had written with a playful, tongue-in-cheek tone, which didn't work when the director decided to "play it straight". Eventually the Betty and her crew became the prototypes for Whedon's
Firefly, which captured the tone he had aimed for in this movie.

Factual errors:
Shock waves travel very far in water. In the underwater scene, every human would have been killed instantly from the grenade launcher shot at the alien.

Ripley:
[voiceover]
My mommy always said there were no monsters. No real ones. But there are.

With Alien 3 closing the story arc of the Alien trilogy, this film
begins with a fresh slate. The Alien films have always been a
director's series but in this film it was the writing that ultimately
killed it. Resurrection tries to be too many things at once. It has a
very artistic and dynamic visual style, but cardboard characters. It
has a very overt sense of humor, but it is all done in a very juvenile
manner. Much of the maturity and restraint of the previous three films
is thrown out in favor of a more comic book style. The cinematography
and set design is gorgeous to the point of decadence. Sigourney Weaver
has been given an interesting character to play and does it with a
strange sense of detachment that lends more depth to the proceedings
than the script ever could. Thinking back, the first three films all
had very solid overall stories and well developed characters while
Resurrection has a very solid concept but can't seem to build a
coherent movie around it. If you follow the overall themes of the
series with the first, second and third being birth, life, and death
respectively that leaves Resurrection on shaky thematic ground. Since
this is Alien: RESURRECTION obviously the filmmakers wished for rebirth
to be the theme, but somehow it never quite works. The characters are
basically action movie clichés, and the action sequences of the movie
are hopelessly contrived. Why does the Alien always stop to snarl
before it attacks giving people just enough time to shoot it? Alien 3
did not have this problem and it reinforced how dangerous the creature
really was. Resurrection turns the Aliens into monsters from a B-movie.
Very few scenes in the film are particularly memorable. Sure, the
underwater chase is a nice bit of action derring-do, but there's no
real sense of danger…except for the supporting characters you barely
know who get killed in the reverse order they appear in the credits.
Two fantastic scenes that I wish there were more of in the film are the
doctor's examination of the Aliens where he "plays" with them. Now that
was a scene of inspired genius. The other scene was when Ripley wakes
up in her circular chamber. It is interesting to note that neither of
these scenes have any dialogue, because the dialogue is pretty
atrocious. Ron Pearlman is always fun to watch and makes a good comic
duo with Dominique Pinon, but Winona Ryder absolutely kills this movie
with her nonperformance. The effects look less realistic this time out
and the score at times seems to try too hard to emulate the second and
third films with Goldsmith's original Alien theme being used on several
occasions. The film is a brilliant exercise in dynamic visuals but the
story really does not go anywhere. Unlike the first three films this
one does not take itself seriously at all so the danger level becomes
nonexistent. I believe Jean-Pierre Jeunet was an excellent choice for a
director but the script served him very badly. This is an interesting
film to watch for an interesting scene here and there but not in the
same league as the previous films.