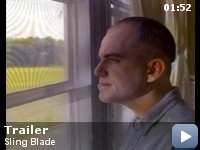 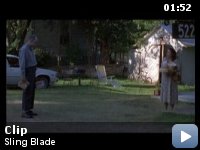 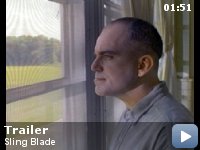 Karl Childers, a simple man hospitalized since his childhood murder of his mother and her lover, is released to start a new life in a small town.

Storyline
A partially handicapped man named Karl is released from a mental hospital, about 20 years after murdering his mother and another person. Karl is often questioned if he will ever kill again, and he shrugs in response saying there is no reason to. Now out of the mental institution, Karl settles in his old, small hometown, occupying himself by fixing motors. After meeting a young boy named Frank who befriends him, Karl is invited to stay at Frank's house with his mother Linda- who views Karl as a strange but kind and generous man. However, Linda's abusive boyfriend Doyle, sees things differently in the way rules ought to be run- normally insulting Linda's homosexual friend Vaughan as well as Karl's disabilities, and having wild parties with his friends. As Karl's relation with Frank grows, he is ever so watchful of Doyle's cruel actions.

Billy Bob Thornton had written the script in long hand, at his family's house in Hot Springs, Arkansas.

Revealing mistakes:
When Doyle drives to the county line to get more alcohol, they're in a "crew cab dually pickup", yet Doyle, Karl, and Vaughan ride in the front seats, the rest of the crew rides in the bed, and no-one rides in the back seats.

Bill Cox:
[lawnmower won't start]
Karl, see if you can figure out what's wrong with this. It won't crank up and everything seems to be put together right.

Filmmaking at it's Best

As someone who loves good filmmaking, I rate this film among the best I've
ever seen in all areas of the craft. Some of the criticisms of this film
are
hard to fathom.

The screenplay has the tight conciseness of a well-honed play (which this
essentially was derived from) and doesn't fail to prick at the emotions
and
the intellect of the viewer. The photography, the casting and the editing
all click together quite admirably.

However, I always marvel at the negative, emotionalized responses to
otherwise superb films such as this by those who seem to miss the entire
point of a movie like "Sling Blade".

I did not see a political message about abortion, or a justification of
murder or even a backhanded putdown of the rural people of Arkansas. (Many
of the characters were locals, by the way.) Some viewers are setting
themselves up to be against this film since they are wearing their own
feelings on their sleeves and fail to see the subtle layers of the story.
They are seeing only the reflection of themselves on the surface of the
water, rather than the complex world below.

Theater and film are rooted in images and characterizations designed to
help
us explore the human condition. It was once said that Tolstoy's voluminous
novel "War and Peace" could be summed up in a single sentence thereby
negating the need to write the book. Art is not a fast explanation, but a
captivating and thought-provoking trip that hopefully forces us to think
about our own motivations. Taking a one-dimensional view of this film
might
lead one to believe that Karl Childer's central message is that we should
all eat biscuits smeared with mustard.

"Sling Blade" excels at the job of making us examine the terrible choices
life gives us by providing a set of characters who interact in a moving,
curious and revealing way. It is not reality nor is it political, but a
method by which we can look at our own individual realities.

Others who seemed disenchanted with this film out-of-hand are those who
found it "slow". Helloooo! This film is SUPPOSED to be slow and
agonizingly
so. It is carefully walking you to the conclusion, step-by-step, so you
can
squirm uncomfortably at the overall foreshadowing. It ain't an
explosion-a-minute John Woo filmmaking and it certainly isn't light
comedy,
though it induces a surprising number of smiles.

This is a film that makes us look at true evil in the form of J.T. Walsh,
Dwight Yoakum and Robert Duval's characters and compare it to the pure
goodness of the damaged creature portrayed by Billy Bob Thornton, whose
own
brutalization leads him to seek justice in his own imperfect
way.

To help those out who didn't "get" this film, I might recommend that you
consider Thornton's character to be an amalgamation of Herman Melville's
innocently homicidal protagonist in "Billy Budd" and Mary Shelley's sad
monster Frankenstein. These characters, like Thornton's Karl Childers,
were
dramatic vehicles for the purpose of making us think. They did bad things
but we were forced to view them compassionately because they reflected our
own conflicting traits.

Don't read things into a film that aren't there, but don't ignore the
interesting elements that are. Get those wheels upstairs turning and start
enjoying intelligent filmmaking instead of merely seeking an excitement
fix!