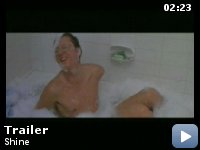 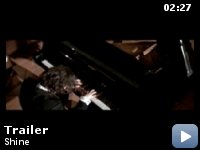 Pianist David Helfgott, driven by his father and teachers, has a breakdown. Years later he returns to the piano, to popular if not critical acclaim.

Storyline
Based on the true story of Australian pianist David Helfgott, this delightful movie charts the traumatic early years through adulthood. Telling the story in flashback we see David as a child prodigy and as he grows up while his patriarchal father abuses him and his siblings with the memory of his childhood in Europe and the loss of his family in the concentration camps. David finally breaks away from his father and goes away to study overseas, he later suffers a breakdown and returns to Australia and a life in an institution. Many years later he is released and through several twists of fate (in reality even more unlikely than film portrays) he starts playing a piano in a bar before finally returning to the concert hall.

Taglines:
A true story of the mystery of music and the miracle of love

Geoffrey Rush had once learned the piano up until aged fourteen. He took up piano lessons again thirty years later for the film and also acted as his own hand double body double.

Factual errors:
The mezzuzah, a Jewish religious scroll attached to a home's door posts, on Ben Rosen's home is angled the wrong way; it should be angled toward the entrance of the home.

Cecil Parkes:
You must play as if there's no tomorrow.

David is a stuttering, rambling man having suffer a complete breakdown as
a
young man. However when he was a child his skills on the piano were
unmatched. Driven by his father, opportunities open up in front of him to
go abroad to learn, but his father denies him the chance. He leaves for
London where he drives himself to the point of exhaustion before coming
back
home to find his father has disowned him.


It took me years to finally watch this film. I was still in Northern
Ireland
when it came out in the cinema and such films were not permitted to cross
our borders, lest they keep the latest action movies from our 1 or 2
screen
cinemas! So away from the hype and the Oscar hoopla I sat to watch this
film and found myself easily taken in by it. The story is the true story
of
David Helfgott who was a boy genius before his breakdown. The film starts
with him as an adult then jumps back to see him as a child. This approach
works well to allow us to see the `end result' as it were, before we see
what would be considered the causation factors. These factors are a
little
heart breaking to watch but they are very well delivered. As an adult,
David is comic, warming and tragic. The pain in his life is brought out
very well.

A great deal of the praise for this must lie with the wonderful cast.
Rush
got his Oscar of course and I'll leave it to the users on the message
boards
to argue over whether or not you can be the lead actor with screen time of
less than half the film! He is great, walking a difficult line with a
`disabled' character but managing not to just make it a caricature at any
point. David as a child is very well played by Rafalowicz and does more
of
the development work than Rush and hence gets less credit than he deserves
for making us care for the adult David. Mueller-Stahl is as good as he
can
be and gives a great performance, the only downside being that he doesn't
age a single day between the adult and child sections of the story –
surely
some makeup could have been used?

Overall this is a very enjoyable human story that is driven by several
really strong performances in key roles. The story keeps it's tone light
but yet still manages to be dramatic and, in some scenes far too touching
to
avoid being slightly moved. The music is beautiful when it is called on
to
be and dramatic at other times – the director does very well to make the
intense music translate into intense scenes in the film. Overall a simple
story of a man but one that is interesting and a lot more moving that I
expected it to be.

TagsAustralia Europe
The English Patient
Jingle All the Way