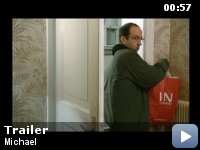 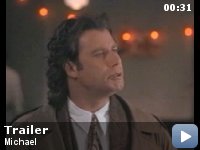 Two tabloid reporters checking out a report of the Archangel Michael living with an old woman find that it's true. But that's not the only surprise.

Storyline
Frank Quinlan and Huey Driscoll, two reporters from a Chicago-based tabloid, along with Dorothy Winters, an 'angel expert', are asked to travel to rural Iowa to investigate a claim from an old woman that she shares her house with a real, live archangel named Michael. Upon arrival, they see that her claims are true – but Michael is not what they expected: he smokes, drinks beer, has a very active libido and has a rather colourful vocabulary. In fact, they would never believe it were it not for the two feathery wings protruding from his back. Michael agrees to travel to Chicago with the threesome, but what they don't realise is that the journey they are about to undertake will change their lives forever.

Taglines:
He's an angel… Not a saint.

Continuity:
After the bullfight, the reporter is shown with his tie over his left shoulder, when shot form the front. From behind, the tie is not over his shoulder.

Michael:
The miles will fly and your children won't cry, if you play car bingo.

It has been quite some time since I last saw this film. However, the
amazingly low IMDB score has prompted me to jot down a few thoughts and
memories I have regarding this under-appreciated masterpiece.

I find it appalling that this film would score so poorly in this arena. It
is a wonderful, life affirming story with a positive message. Perhaps this
is what we have come to. The comedy is not gross enough, the message too
sentimental and the meaning too simple for modern "sophisticated" audiences.
Well, I for one, absolutely loved every minute of it. It is easily Andie
MacDowell's best performance. William Hurt is fantastic as the cynic who
comes around in the end and the whole supporting cast does a wonderful job.
Of course, John Travolta is superb. This is one of my favorite roles
Travolta has played and it is simply resplendent. I would have to say this
is in my top twenty of comedy-dramas ever. I just happen to love the way the
film unapologetically illustrates how wonderful life is. How even the little
things that we take for granted, like pie, are fantastic and how we should
enjoy every minute like it was our last.

For a much more detailed and well written review see the fine work of
jhclues who echoes my feelings about the movie so much that I feel it would
be redundant of me to restate, probably poorly, all that they have already
committed to page.

It is also interesting that so many people really hated it. I wonder if they
weren't just put off by the "less than traditional" view of a religious
subject.

TagsUSA
Scream
Everyone Says I Love You