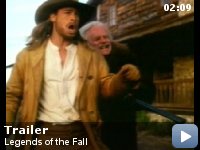 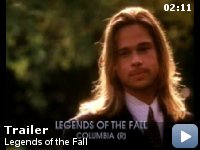 Epic tale of three brothers and their father living in the remote wilderness of 1900s USA and how their lives are affected by nature, history, war, and love.

Storyline
Set in the Rocky Mountains of Montana in the early 1900s, this is a tale of love, betrayal, and brotherhood. After being discharged, Colonel Ludlow decides to raise his three sons in the wilds of Montana, where they can grow up away from the government and society he has learned to despise. The three brothers mature and seem to have an unbreakable bond, until Susanna enters their lives. When Samuel, the youngest of the three, returns from college he brings with him his beautiful fiancée, Susanna. The eldest son, Alfred, soon finds himself in love with his brother's fiancée, and things get worse when he discovers a growing passion between Susanna and Tristan. Colonel Ludlow's favorite son, Tristan is willful and as wild as the mountains. As the brothers set out to fight a war in Europe, suspicion and jealousy threatens to tear apart their once indestructible bond.

Taglines:
The men of the Ludlow family. A woman's grace brought them together. Then her passion tore them apart.

The book from which Colonel Ludlow is reading the night the boys announce they're going to war is the short story "Rikki-Tikki-Tavi" by Rudyard Kipling in "The Jungle Book," volume two.

Continuity:
Juxtaposition of heads when Tristan and Samuel hug after making it back to the foxhole.

One Stab:
Some people hear their own inner voices with great clearness and they live by what they hear. Such people become crazy, or they become legends.

Moved me like no film I've seen in a long damn time!


I watch a lot of movies & I can't remember the last time a film held me
so spellbound. Not only are the characters engaging & vividly portrayed
by an excellent cast, the subtle dynamics of their interactions are
portrayed with inspired undertone & nuance. Star billing or even an
Oscar should also have been awarded to the spectacularly beautiful
scenery of Montana for the vast majesty it bestowed.

This complex saga of love, grief & loyalty is narrated with stark
simplicity by old Stab, long-time friend to retired Colonel Ludlow &
his 3 sons: staid Alfred, the eldest ("old even for his years");
idealistic Samuel, the youngest ("There was nothing these brothers
would not do for him."); & wild Tristan ("Such people become crazy or
they become legends."). The conflict between Ludlow's fiercely
anti-government anti-war stance & his sons' determination to do what
they see as their duty is but a small part of the story; the heart of
the tale is the rift that threatens the mutual devotion of these 3
loyal brothers as they all come to love the same woman. "She was not to
blame," Stab tells us, "She was like the ice that freezes in the rock
and splits it apart."

A tragic tale, yes; heartbreaking at times, but never boring. Every
time I felt certain I knew what was coming next, the plot took another
unexpected turn & I sat there riveted, softly breathing "Wow!" now &
again into the darkness. This film immediately became one of my
all-time favorites; I've watched it half a dozen times since then & its
scope & power never fail to move me.