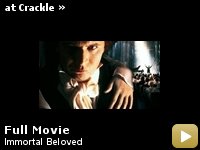 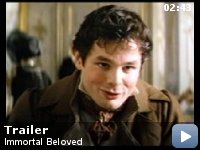 The life and death of the legendary Ludwig van Beethoven. Beside all the work he is known for, the composer…

Storyline
The life and death of the legendary Ludwig van Beethoven. Beside all the work he is known for, the composer once wrote a famous love letter to a nameless beloved and the movie tries to find out who this beloved was. Not easy as Beethoven has had many women in his life.

Taglines:
The genius behind the music. The madness behind the man. The untold love story of Ludwig von Beethoven.

What Beethoven says to Schindler during their first meeting (a rehearsal of the Kreutzer sonata) is taken from Tolstoy's short story "The Kreutzer Sonata".

Factual errors:
At his first public recital, Ludwig was eight years-old (some sources report seven) and his father announced him as six, yet the movie conveys, via voiceover, that Ludwig was "12 and his father told the court he was nine".

Ludwig van Beethoven:
[Beethoven raises his fist in the air and mutters his last words]
The comedy is over.

Ludwig van Beethoven was one of the greatest composers– some would say THE
greatest– in the history of the world. But what of the man himself? His
passions, his loves? The humanness behind the genius? `Immortal Beloved,'
written and directed by Bernard Rose, examines the man behind the music in a
dramatization focusing on the mystery behind a letter– written by
Beethoven– found among his effects after his death in 1827. The letter
bears no name or address, but was written to a woman to whom he refers as
his `immortal beloved,' with nary a clue as to her identity. But in his
final will, it is she to whom he bequeaths his estate, and it therefore
falls to Beethoven's secretary, Anton Schindler (Jeroen Krabbe), to unravel
the mystery and discover her identity. And as Schindler pursues his quest,
a portrait of Beethoven, in his most human aspect, emerges.
Reminiscent of the approach taken by Orson Welles with `Citizen Kane,' Rose
presents a riveting study of the enigmatic genius that was Beethoven. He
suggests a man driven by passion and ego, who was under appreciated during
his lifetime (as great artists often are), and who grew bitter in the wake
of the slings and arrows fate so surreptitiously hurled at him. The great
irony of his life, of course, was the deafness that deprived him of the
aural beauty of his own creation, an affliction Rose implies was brought
about through the brutality of a drunken father who would beat his son about
the head and ears (And in retrospect, what a testimony to his genius, that
he could write such music in his head without ever hearing an actual
note).
As Beethoven, Gary Oldman gives an outstanding performance, one for which
he should have received acclaim that somehow was never forthcoming. His
ability to create a total character, with such incredible emotional depth as
he does here, is astounding. It's puzzling as to why so many of his
performances are overlooked, especially at Oscar time. Besides this film,
consider his work in `Sid and Nancy,' or more recently in `The Contender.'
He is simply a tremendous actor who has yet to have his day in the sun. As
Beethoven, he so completely immerses himself in the character that his soul
is veritably reflected in his eyes. You feel the silent world in which he
was confined for most of his life, and it allows you to identify with the
inner turmoil with which he had to cope and endure without respite. Most
importantly, Oldman makes you feel that unabashed passion that motivated and
drove Beethoven on. It's quite simply a remarkable performance. Turning in
notable performances as well are Isabella Rossellini, as Anna Marie Erdody,
one of the women in Beethoven's life who may or may not have been the one to
whom the letter was intended, and Johanna ter Steege, as Johanna,
Beethoven's sister-in-law and the mother of his beloved nephew, Karl (Marco
Hofschneider).
The supporting cast includes Miriam Margolyes (Nanette), Barry Humphries
(Clemens), Valeria Golino (Giulietta), Gerard Horan (Nikolaus), Christopher
Fulford (Casper), Alexandra Pigg (Therese) and Luigi Diberti (Franz).
Beethoven's renown today, of course, exceeds even mythological proportions,
which often facilitates the blending of fiction with fact. But with
`Immortal Beloved,' whether or not the finer points are historically
accurate or not is of little consequence, for at it's heart this is a love
story that is engrossing drama that is altogether transporting. It's a
memorable film, highlighted by Oldman's performance and, of course, the
music. And there are a number of scenes, as well, that are unforgettable
and demand mention. One depicting the debut performance of the `Ode to
Joy,' and another in which the young Beethoven (played by Leo Faulkner) runs
at night through the streets of the city to escape his drunken father
(Fintan McKeown), coming at last to a lake, into which he wades to float on
his back; and with the camera positioned directly above, looking down upon
him, a billion stars are reflected in the water around him. Then slowly the
camera pulls back until the young Ludwig blends with the reflected stars to
seemingly take his place among all the brightest lights of the firmament.
It's a scene that will leave you breathless and remain etched in your memory
forever. And it's but one of the more astounding moments from an astounding
motion picture that absolutely must not be missed. I rate this one 10/10.