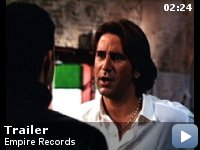 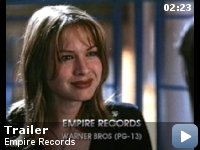 The employees of an independent music store learn about each other as they try anything to stop the store being absorbed by a large chain.

Storyline
A day in the life of the employees of Empire Records. Except this is a day where everything comes to a head for a number of them facing personal crises – can they pull through together? And more importantly, can they keep their record store independent and not swallowed up by corporate greed?

Continuity:
When the staff is dancing to Rex Manning, Deb takes off A.J.'s shirt. In the next shot he is seen with his shirt, and then again without it.

Eddie:
Can I ask you something? Do you know where Harvard is?

Eddie:
No I mean, do you really know where Harvard is? It's another planet man- another universe. Totally unlike the one we know. Filled with big blond guys who eat ivy and row boats. What I'm trying to say is, you and Corey just aren't made for each other. She's different from you.

See it twice to appreciate it…..you'll be lukewarm the first time and love it the second time.

I love this movie. This movie is the kind of movie I watch movies for
(um….did you follow that?). I would make one suggestion,
however….watch
it twice before you decide if you like it or not. If you're like me you'll
probably be lukewarm the first time you see it but like it more each time
you see it after that.

The reason for seeing it twice is because the film's strong points become
more evident the second (and beyond) time around. Each character is
well-defined, with individual traits and idiosynchracies, but this can be
lost the first time through because you're trying to follow the story.
There is a very strong soundtrack for the movie, but you appreciate it more
the second time through, because you better understand how the music
applies
to the scene. The actors have great chemistry and the character
interactions are great. The movie never takes itself very seriously and
it's just a lot of fun to watch. You'll find yourself rewinding it to see
certain scenes again and again.

I grant you the movie will never win any Academy nominations. The plot is
simplistic and the "neat" ending (all problems solved perfectly in just one
day) is unrealistic (not that this bothered me….I personally loved the
ending….if I want "reality" I'll watch the evening news). Also, trying
to
follow the storyline tends to take away from the character interaction the
first time you see it; hence, the suggestion to see it at least twice. I
actually didn't care for it the first time I saw it because I was looking
at
it strictly story-wise. The second time I saw it I concentrated on the
characters and the dialogue(which I loved), and that's when I realized the
appeal. If you're into serious movies that reflect real life and real
suffering, you'll probably want to pass on this one. However, if you watch
movies to have fun and laugh, watch this one. Also, if you like music-
especially a moderately wide variety- you'll enjoy it. It's worth your
time, but save the beer for the second viewing. "Sugarhigh" is awesome-
Well done, Gina! Hot voice…. Oh, and Damn the Man! 9 out of 10.