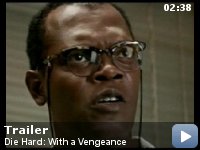 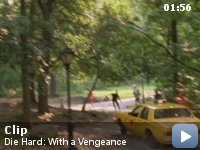 John McClane and a store owner must play a bomber's deadly game as they race around New York while trying to stop him.

Storyline
John McClane is now almost a full-blown alcoholic and is suspended from the NYPD. But when a bomb goes off in the Bonwit Teller Department Store the police go insane trying to figure out what's going on. Soon, a man named Simon calls and asks for McClane. Simon tells Inspector Walter Cobb that McClane is going to play a game called "Simon Says". He says that McClane is going to do the tasks he assigns him. If not, he'll blow off another bomb. With the help of a Harlem electrician, John McClane must race all over New York trying to figure out the frustrating puzzles that the crafty terrorist gives him. But when a bomb goes off in a subway station right by the Federal Reserve (the biggest gold storage in the world) things start to get heated up.

Taglines:
It's boometime in the big apple

There is a war reference in each of the first three Die Hard films. This film's is when the FBI agent references the Battle of the Bulge.

Continuity:
At Yankee Stadium, the pipe in the picture behind Zeus changes size and position, depending on the view of the camera. Also in some shots there is a man standing next to the pipe; in other shots he is not there.

Inspector Cobb:
Alan, Bomb Squad, Special Services, State Police and the F.B.I. Lt. Jurgensen, you, Plummer, I want you to go to St. John's Emergency in case we got any walk-ins from the street. Kramer, get the City Engineer. I got to find out our damage report.


Series note: Although the Die Hard films obviously follow one another
chronologically in the film's universe, they are not really constructed
as chapters in a novel. You could watch them in any order, but to give
the characters more depth, and make better sense of a couple minor
references, I would still recommend watching them in order.

In my Die Hard 2 (1990) review, I complained (although apologetically)
a bit about the lapses in internal logic. It ended up being somewhat
excusable, because I read Die Hard 2 as a satire of the genre as much
as a serious action film. With Die Hard 3, John McTiernan is back at
the helm, as he was for Die Hard (1988), and the result is once again a
more serious action film (containing some comic relief, of course) with
very taut internal logic. In fact, Die Hard: With a Vengeance is so
well constructed, so well acted and so well directed that I like it
just as much, if not better, than Die Hard.

John McClane (Bruce Willis) is once again separated from his wife, and
he's once again living and working as a cop in New York City. As the
film begins, he is on a temporary suspension for some never-specified
infraction (it works better that it isn't specified, as it enables us
to imagine all kinds of crazy things that this gruff character might
have done). After a bomb explodes at the Bonwit Teller department
store, a mysterious person calling himself "Simon" calls the police
taking credit and asking to speak with McClane–or he'll detonate
further bombs in crowded areas. They rouse McClane from the aftermath
of a drunken stupor. He shows up at the police station with a hangover,
looking haggard. "Simon" is fond of riddles and makes McClane engage in
a bizarre game of "Simon Says". The first task is for McClane to head
up to Harlem and stand on a street corner in his skivvies wearing a
sandwich board that says only, "I Hate Blacks" (using a more
inflammatory epithet than "blacks"). Of course, he almost gets killed,
but at the last minute, a reluctant savior in the form of a local
shopkeeper, Zeus Carver (Samuel L. Jackson), helps save his butt.
Unwittingly, Carver ends up embroiled in the Simon Says games with
McClane, with increasingly serious stakes. Just who is Simon? Why is he
toying with McClane?

I should note that I was predisposed to like this film. I like Bruce
Willis a lot, but I especially love Samuel L. Jackson. The combination
of the two here is simply magical. They have remarkable chemistry and
the characters that scriptwriter Jonathan Hensleigh has drawn enable
both deep tension and hilarious comic moments between the two.

But the film succeeds on more than the charisma of its two principal
actors. Die Hard: With a Vengeance has a fantastic, intelligent plot.
Hensleigh ties his villain to the story of the first film in a
semi-satirical way that gives the motivation for the "Simon Says" games
great depth. The Simon Says games manage to be silly, smart, humorous
and great catalysts for dramatic tension at the same time. There are
subtle jokes about New York City, New York City cops, "reverse racism",
European opinions of American intelligence, and so on. And of course,
there are many edge-of-your-seat, nail-biting action sequences
involving a wide variety of environments in the New York City area. The
wide variety of environments was a nice change over the more limited
settings of the previous two films, and gives Die Hard: With a
Vengeance a feel almost like an adventure film.

It's remarkable that Hensleigh and McTiernan were able to sustain such
a high level of excellence throughout. If you look at Die Hard: With a
Vengeance from a broader perspective, the whole is constructed
something like one of Simon's puzzles. Every scene leads inevitably,
logically to the next scene, even though the film takes many "left
turns", and the solution of one dilemma to the next often involves
split-second timing.

It's often said that McTiernan and Hensleigh simply ignored Die Hard 2,
and in terms of direct plot and dialogue references, this may be true,
but they still give Die Hard 2 a nod by having an attendant
humor–often almost "goofy" humor–in many action scenes. One of the
most direct nods occurs with McClane "riding" something of an explosion
(of water this time). This is one of the more hilarious scenes of the
film.

As for subtexts, they are similar to those of the first Die Hard, with
some interesting additions. There is an intriguing parallel between
McClane's disheveled state, the typical New York City chaos, and the
attempts to further undermine stability from the villain. Focusing on
this aspect, Carver provides more of a dependable, even-keeled balance.

There are also direct references to very contemporary political
subtexts–with foreigners having in mind that the U.S. has
socio-economic power disproportionately in its favor. They claim to
want to redress the imbalance, although in this film, at least, the
claim may end up being a false representation–there appears to be
corruption undermining it. However, it's interesting that there is yet
another "twist" towards the end that shows the claim may not have been
as corrupt as we initially believed, even if it still seems a bit mad
and/or megalomaniacal. It's also interesting that the resolution is
reached on foreign ground.

But the subtexts in Die Hard: With a Vengeance may be even more minor
focuses than in the previous two films. Instead the focus is on the
spectacle of a tightly told, thrilling action/adventure story. That's
all the film needs to succeed as well as it does.