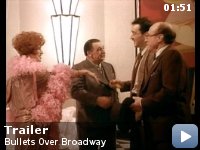 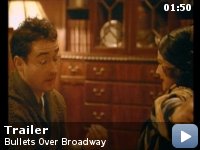 In 1920s New York, a struggling playwright is forced to cast a mobster's talentless girlfriend in his latest drama in order to get it produced.

Storyline
Set in 1920's New York City, this movie tells the story of idealistic young playwright David Shayne. Producer Julian Marx finally finds funding for the project from gangster Nick Valenti. The catch is that Nick's girl friend Olive Neal gets the part of a psychiatrist, and Olive is a bimbo who could never pass for a psychiatrist as well as being a dreadful actress. Agreeing to this first compromise is the first step to Broadway's complete seduction of David, who neglects longtime girl friend Ellen. Meanwhile David puts up with Warner Purcell, the leading man who is a compulsive eater, Helen Sinclair, the grand dame who wants her part jazzed up, and Cheech, Olive's interfering hitman / bodyguard. Eventually, the playwright must decide whether art or life is more important.

Anachronisms:
When Cheech and David walk through a neighborhood, the corner has an obvious, modern handicap curb-cut.

Cheech:
Where I come from, nobody squeals!

In 1920's New York a young author, David, manages to get his play off the
ground with funding from mobster Valenti. The money allows David to get
actors of the caliber of Helen Sinclair and Warner Purcell, however there's
a catch. Valenti wants his screechy girl friend Olive to play a key part.
This problem is compounded by Olive's minder Cheech who has plenty of
constructive criticism on how the play could be better. David tries to
balance all these in the name of art.


It's rarely new ground that Woody Allen walks – but how come he manages to
make it so damn sparkly and witty? Here he delivers wonderful spoof on
theatre people and the assumptions we all make about characters based on
what they do or how they talk. The writing is spot on, Allen delivers
tonnes of great lines but also creates characters that he expands over the
film. It is very watchable and it rarely suffers from the fate on some of
Allen's recent comedies – feeling too light or whimsical for it's own good.
Instead it is funny but has some points to make.

Of course it always helps if you have a great cast and this does. With
people like Warden, Broadbent, Wiest, Tilly, Parker, Fierstein, Reiner,
Falco and Palminteri it's hard not to have at least the majority of the cast
giving good performances – Wiest, Tilly and Palminteri were my favourites.
Cusack was good as the overpowered writer but the one thing I didn't like is
the same with many actors who do the traditional Woody role – he gives a
slight impression at times rather than cutting out the role as his
own.

Overall Woody Allen may not be everyone's cup of tea – but for fans this is
him at his whimsical best. Not a classic comedy but a warm Allen film that
sparkles in nearly every scene.