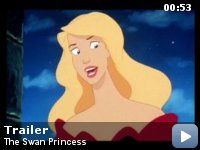 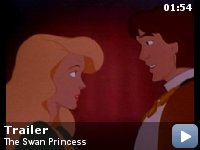 A power hungry sorcerer transforms a princess into a swan by day in this tale of everlasting love.

Storyline
As children, Prince Derek and Princess Odette are forced to spend their summers together by their widowed parents, who hope that the two will eventually fall in love and marry, so that the kingdoms of the two will be united. As children and adolescents, Derek and Odette can't stand each other, but as young adults they begin to see each other in a different light and fall in love with each other. But one night things take a bad turn when Derek unintentionally offends Odette, who then refuses to marry him if he can't prove that he loves her for who she is and not just her beauty. Odette and her father are then attacked by Lord Rothbart, a vengeful sorcerer who was cast out of William's kingdom when he plotted against the king. In the form of a beast, Rothbart mortally wounds William, and kidnaps Odette then places her under a spell. Now it is up to Derek to rescue Odette by showing his undying love. But, will he be in time?

The princesses presented to Derek during the "Princesses on Parade" are: Colchester Princess, Antonia, Griselda and Brunhilda.

Revealing mistakes:
Throughout the whole movie, whenever we see a large crowd – the public in the opening scene with baby Odette, the audience in the ball when Prince Derek messes it up, the crowd at the harbor when teen princess Odette uses the sling shot on Derek and so on – the characters are completely still, as a sign that the only animated characters in the film are the ones in the front.

Puffin:
There you have it, everlasting love.

A good, watchable movie despite its flaws.

Compared to previous attempts by competing studios to break Disney's
stranglehold on the animated film market, The Swan Princess really is a
good
movie. The animation does not quite have Disney's finesse and got a little
rough in places, but was still watchable and generally pleasing to the
eye,
unlike, say, Thumbelina. The songs, though not particularly memorable and
vaguely cheesy in the manner of much older animated flicks, did not bring
the movie to a grinding halt and actually managed to, in general, help it
along. It has a plot.

That's not to say that The Swan Princess doesn't have its problems, mostly
in its characters. The titular lead, Princess Odette, is a flat failure as
a
heroine–she never *does* anything except lead her one true love, Prince
Derrick, to her–and even then, she only does that because her animal
friends, Puffin, Speed the turtle, and Jean-Bob the frog, cook up the plan
for her.

Derrick is much more likeable, and though throughout most of the movie he
is
a flaming idiot, he is a likeable and sympathetic flaming idiot–and he
does
learn. His mistakes are, as a rule, human and understandable, and in the
end
it is he who saves the day and finally learns the movie's apparent
lesson–that beauty is not all there is in matters of love or anything
else.

The development of their relationship is refreshing–rather than falling
in
love at first sight, they start out hating each other with a passion, and
it
takes them years–spanned capably over the course of one amusing if sugary
song–to realize that they do love each other. And then Derrick blows
it(!),
and spends the rest of the movie scrambling to recover from his
mistake.

The end battle was satisfying, though in general I prefer for the heroine
to
help save their hides in some manner. The movie-makers were not afraid to
beat
the living daylights out of their hero, and though the save he pulls in
the
end is nothing short of miraculous, it was at least shown much earlier to
be
within his princely capabilities.

Despite its flaws, I found The Swan Princess to be a satisfying and
re-watchable movie–though I did catch myself agreeing with Derrick's
comment (stated early in the movie) that he could do much
better.