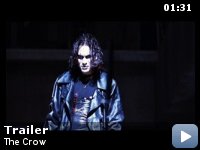 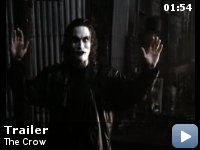 A man brutally murdered comes back to life as an undead avenger of his and his fiancée's murder.

Storyline
A poetic guitarist Eric Draven is brought back to life by a crow a year after he and his fiancée are murdered. The crow guides him through the land of the living, and leads him to his killers: knife thrower Tin-tin, drugetic Funboy, car buff T-Bird, and the unsophisticated Skank. One by one, Eric gives these thugs a taste of their own medicine. However their leader Top-Dollar, a world-class crime lord who will dispatch his enemies with a Japanese sword and joke about it later, will soon learn the legend of the crow and the secret to the vigilante's invincibility.

Taglines:
In a world without justice, one man was chosen to protect the innocent.

The incendiary device which Eric drops in T-Bird's lap is a white phosphorous grenade. When it detonates it burns at 2500 degrees Fahrenheit.

Continuity:
When Gideon is stabbed and shot you can see him take a breath before it changes to the next scene.

Sarah:
[voiceover]
People once believed that when someone dies, a crow carries their soul to the land of the dead. But sometimes, something so bad happens that a terrible sadness is carried with it and the soul can't rest. Then sometimes, just sometimes, the crow can bring that soul back to put the wrong things right.


The only thing i can say is that when i left the movie theater then i
had no comment to give… This movie got to me deep! I was 14 and now i
am 25,and still i remember it so well and i still watch it sometimes..
Brandon Lee did a great job as an actor like everyone else, but the
story about his death is totally insane, which made me worship the
movie even more. What an irony. I like the movie cause it's dark, but
also lighted up with true emotions..there is action, horror, love, even
poetry for god sake! I have never seen so many genre's in one movie.
Anyway for me it has been one of the best movies i have ever watched.
And one more comment, lots of of other movies got ideas from The Crow,
meaning the setting, the action, music, whatever it is the crow was
their start up. I am not going to name them, Crow fans probably know
what i am talking about.. My favorite quote: "Can't rain all the time"
By the way the soundtrack's are awesome, The Cure's best song ever made
is in it! P.S. The Crow II and III sucked, i hated it. They just ruined
the conception of the first one.. totally..